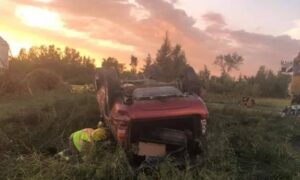 2 Dead in Manitoba After Tornado Threw Their Vehicle Into a Field: RCMP
0

OTTAWA—During the Finance and Economic Development Committee meeting at city hall on March 4, Mayor Jim Watson lamented the failure to build the pedestrian bridge across the Airport Parkway.

“It should be easy to complete but has become an embarrassment,” he said.

Watson also said the city needs to learn from what went wrong with the project to prevent such failures in the future.

SEG Management Consultants Inc. was hired to review the project, identify the issues, and provide recommendations for future projects. The report was given to the city on Feb. 21 and presented at the meeting by Ron DeVries, a senior consultant with the company.

In it were nine observations on what went wrong and recommendations on how to eliminate or mitigate the issues in future projects.

After the presentation of the report, members of the committee repeatedly asked staff why and how the project went wrong. But it wasn’t easy to get answers to the councillors’ questions as to why upper management in the infrastructure services department wasn’t aware of problems with the pedestrian/cycling bridge earlier.

Wayne Newell, the city’s general manager of infrastructure services, repeatedly admitted that needed processes and policies weren’t in place that would have stopped the problems right at the start of the project.

It seems communication wasn’t the only issue. Incredibly, regular reports were being sent to the managers that didn’t contain any information about project delays and problems. No one asked for more specific information; neither did anyone ask why it wasn’t being provided.

Although a routine requirement of such projects is a constructability review report, it also wasn’t asked for even though the bridge was known to be a complex structure. No one knew why.

The project was started eight months late, and yet the timelines for design and construction weren’t extended to accommodate this delay. The compressed timeline for completion increased the difficulty of the project and created pressure for the contractor hired to build it. There was no evidence of discussion of scheduling issues even though it was clear early on that the completion date at the end of October 2011 would not be met.

The contractor encountered issues with constructing the bridge as designed, and near the end of the contract period problems with faulty concrete in the lower tower, which had to be repoured. The contract was extended to Nov. 28, 2011.

Newell said he didn’t pay regular visits to the site until near the initial completion date of October 2011, and that’s when he learned that the bridge construction had barely started. He has been to the site “hundreds of times” since, he said.

It wasn’t until September 2013, when the project was three years behind schedule and some $4.5 million over budget, that construction was halted and a new and more workable bridge design was ordered.

Barbara Shea, who lives near the Airport Parkway, said it best: “This project has damaged the reputation of the city to manage a project.”

She said she hopes the recommendations are implemented to prevent a recurrence of such huge delays and budget overruns.

Both Newell and his boss, deputy city manager Nancy Scheper, stated that they have already incorporated some of the third-party report recommendations as the failures came to light. They feel that they are now on top of the project as they are using a completely enhanced approach.

Newell promised to present an action plan that incorporates all recommendations from the report to the mayor and council within six weeks. The issue of accountability for failure of the project will be dealt with at a later date.