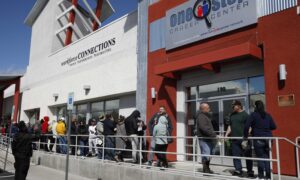 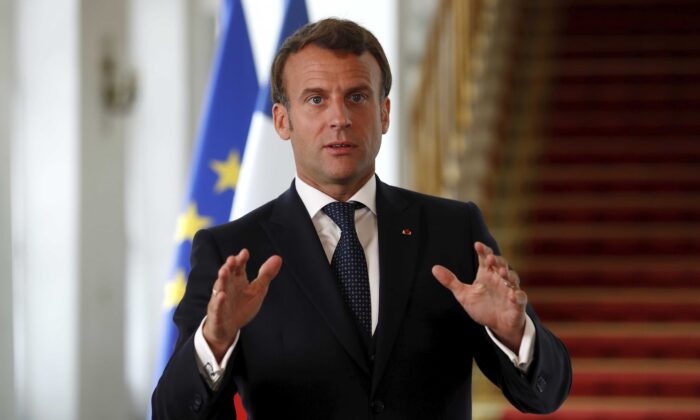 French President Emmanuel Macron speaks after a video-conference summit on vaccination at the Elysee Palace in Paris on May 4, 2020. (Gonzalo Fuentes/Pool via AP)
Viewpoints

Since mid-March, the French people have been coping with one of the strictest lockdowns in Europe. Large gatherings have been banned, and schools, bars, restaurants, and all shops (except for grocery stores) have been closed. Only “essential” trips outside home are allowed, and most businesses and factories have shut down. The enforcement of rules has been heavy-handed: police made 13.5 million checks and issued more than eight hundred thousand fines in just the first month of confinement.

On April 13, President Macron announced a thirty-day prolongation of the lockdown, followed by a very gradual reopening of activity, subject to strict social distancing rules. As if this were not bad enough for a nose-diving economy,[1] Macron also unveiled a stunning vision about the postcoronavirus world. In this new world, France would regain independence over its agriculture, industry, health, and technology sectors while reinventing itself ideologically. Thus, President Macron embraced the antiglobalist and protectionist agenda of the fast-rising populist parties. What may seem like just a shrewd political maneuver is actually a desperate attempt to save France’s inefficient welfare model at any cost.

Hampered by massive government intervention, the French economy has not been able to maintain a competitive edge in the euro area or in the world. The annual growth rate of GDP per capita has slowed to below 1 percent on average in the last two decades, lagging behind those of the United States, Germany, and the euro area (Graph 1). This is a stark decline from average annual growth rates of 3 percent in the 1970s and 2 percent in the 1980s. As a parallel, labor productivity growth declined to about 0.5 percent in 2018, below German and U.S. rates (OECD 2019), due to a sharp deceleration of both capital accumulation and technological progress (Graph 2).

For the past twenty years, French living standards have risen more slowly than the euro area average, while high market inequality has been alleviated by hefty income redistribution (IMF 2019). Average wages fell further behind U.S. and German levels (Graph 3) but were still growing above labor productivity (Graph 4). Given France’s dismal growth performance, the evolution of wages and incomes would have been even more sluggish if they had not been propped up by a steady increase in both public and private indebtedness. Since 1995, France’s total debt has increased by a whopping 150 percent of GDP to reach a historic high of about 365 percent of GDP in 2018. The private sector originated about two-thirds of the increase and is now much more indebted than its counterparts in the United States and Germany.

The significant loss of export market share, deindustrialization, and relocation of companies is another sign of France’s economic woes. Due to the rise of China and other emerging markets, many advanced economies have lost global market share since the 1990s. Yet France’s export market share shrank more rapidly than those of many peer countries, most notably Germany (Graph 5). A large number of company relocations and increasing outward foreign direct investment (FDI, Graph 6) hampered capital accumulation and labor productivity.

In order to afford to pay wages that are growing above productivity, both companies and the public sector became more and more indebted. The record low interest rates in the euro area made the debt accumulation look sustainable, but this debt spiral cannot continue ad infinitum. Prior to the euro, when France was inflating the money supply and prices relative to Germany, the French franc would depreciate versus the Deutsche mark, reducing the purchasing power of wages and other incomes in international terms. With a relatively strong euro, bolstered by more competitive euro area countries, this correction mechanism doesn’t function anymore. As a result, France’s current account moved into deficit and its external debt surged from 100 percent of GDP in 2004 to 180 percent of GDP in 2018.

France cannot collect enough revenues to cover its colossal amount of public spending despite a high level of taxation. The budget has been in a deficit since 1974, and public debt has increased fivefold, from 20 percent of GDP in 1980 to 100 percent of GDP in 2019 (Graph 8). The tax burden on businesses and labor remains substantial. At about 35 percent, France has the highest statutory corporate income tax rate in the OECD. Social contributions collected from employers are the highest in the EU at about 12 percent of GDP (OECD 2019). This fuels capital outflows and unemployment, reinforcing the vicious circle between anemic growth and debt accumulation.

The government’s heavy intervention in the economy goes beyond the large public sector, which redistributes more than half of GDP. A myriad of rules and regulations encumber free initiative and employment. According to France’s ranking in the 2019 Global Competitiveness Index, domestic competition is restricted by the distortive taxes and subsidies and high entry barriers in the services sector. Relatively high nontariff barriers reduce foreign competition. Most important, labor market rigidity is very severe on account of costly layoffs, powerful trade unions, and a high minimum wage, which distort the pay-productivity ratio. In terms of labor taxation, France “achieved” the dubious honor of ranking last out of 141 countries. It is no surprise that the unemployment rate has stubbornly remained above 8 percent since the global financial crisis, whereas it dropped below 4 percent in the United States and Germany.

President Macron’s dilemma is understandable. For several decades the French economy has been entering a negative spiral of slowing growth and rapid accumulation of debt. The generous welfare model is even less sustainable in a globalized economy, and radical free market reforms are necessary to reignite growth. As social resistance to reforms has been unbreakable so far,[3] Macron seems poised to use the COVID-19 crisis to protect France’s sclerotic welfare model from international competition. At the same time he is also calling for debt mutualization in the euro area to reinflate the French debt bubble. But this new political and economic strategy is very likely to fail.

First, the French plans are incompatible with the current architecture of the European Union. The EU’s single market is built on the principle of businesses competing freely across the continent, limited state aid, and a common foreign trade policy. France would need to convince all the other EU members to turn protectionist, including the more competitive ones, which may be almost impossible. Similarly, the more thrifty members of the euro area are likely to oppose France’s call for debt mutualization. On the other hand, the “Green Deal,” which tops the political agenda in Europe and potentially involves a carbon tax on imports, may provide a tailwind for President Macron’s endeavors.

Second, autarky and debt monetization, reminiscent of France’s mercantilist and statist tradition, initiated by Colbert in the seventeenth century, will only accelerate the economic decline. As Rothbard​ argues reductio ad absurdum, protectionism can indeed ensure “self-sufficiency.” However this “sufficiency” comes at the cost of a lower standard of living attained with a higher labor input, because a hampered international division of labor reduces productivity. The unemployment problem could be alleviated and nominal wages could increase if most goods and services had to be produced domestically and the money were primarily used at home, in particular if an inflationary policy were also pursued, as France seems to favor. But prices would go up too, and real wages would plunge dramatically. Moreover, in the absence of international trade and social cooperation, “It would be almost inevitable for such an autistic world to be strongly marked by violence and perpetual war.”[4]

Dr. Mihai Macovei is an associated researcher at the Ludwig von Mises Institute Romania and works for an international organization in Brussels, Belgium.