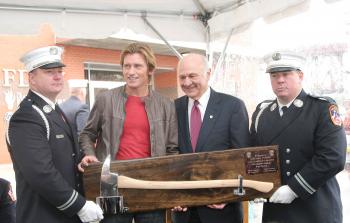 Actor and president of the Leary Firefighters Foundation, Denis Leary (2nd from left) is presented with a mounted fireman's axe by NYC Fire Commissioner Nicholas Scoppetta (2nd from right) and FDNY Captains Michael Maye (left) and Marc Merra during the de (Getty Images)
US

The new facility recreates hazardous scenarios that firefighters could face if one of Manhattan’s skyscrapers went up in flames.

Since 9-11, the safety of people inside Manhattan’s large office buildings has become a pressing issue for the Fire Department.

New York City Fire Commissioner Nicholas Scoppetta said because about half of the firefighters joined the force after the 9-11 tragedy the officers are less experienced.

“Since 9-11 we have hired over 5,000 of our firefighters, of the 11,500 that we have. So 50 percent of our department does not have the 20 years experience that we used to have for officers and others in command,” Mr Scoppetta said.

The New York Fire Department is currently hosting a high-rise fire conference coinciding with the dedication of the training simulator. More than 350 fire officials from the United States and abroad have gathered to share experiences and learn from each other.

“It represents an excellent training tool and we can train firefighters in a safe environment which means out on the front lines we can minimize the risk and reduce the dangers to those people,” Kerr said.

He said firefighters in the U.K. had also lost their lives in high-rise building fires.

The new training facility reproduces the conditions firefighters face in high-rise building fires, including the retention of heat and gases. One part of the building simulates the huge flames and gases generated when a sofa catches fire.

Mr. Scoppetta said the conditions are very unique, and training like this could save many lives.

“The gases at the top of a room ignite when they get hot enough and then the room is filled with a fire ball," he said.

Hong Kong Deputy Fire Chief Shane Lo said although the facility was expensive—it will be worth it.

“I think money should not be an issue, as long as it can improve the efficiency of the firefighters,” he said.

This project is funded by actor Denis Leary’s Leary Firefighters Foundation, The New York Fire Department, and the City of New York. Mr. Leary is the star of the TV show “Rescue Me” about at New York City firefighter.