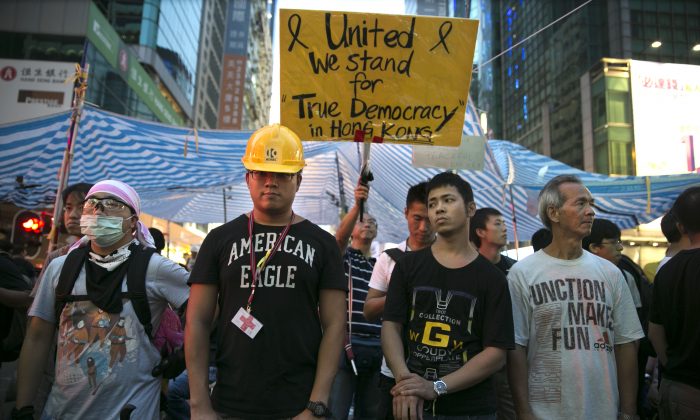 Faced With Communism, Hong Kong Should Remind Us of the Value of Democracy

The greatest killers in the known history of the world never faced justice, and in the void left by their unpunished crimes the world risks slipping backward into the mistakes of history. That is the message delivered by Marion Smith, the executive director of the Victims of Communism Memorial Foundation, in an interview with Epoch Times.

Communism has claimed the lives of more than 100 million people in the less than 100 years since Russia’s Bolshevik Revolution in October 1917, according to the Victims of Communism Memorial Foundation. Its death toll is higher than that of World War I and World War II combined.

“Communism is the deadliest ideology in history.”
— Marion Smith, executive director of the Victims of Communism Memorial Foundation

Communism began a wave of famine and killing that swept through Europe, Asia, Africa, and South America. In every country it touched, totalitarian regimes took power or violent guerrilla movements launched campaigns of terror and tyranny.

“The appalling ignorance of many Americans about the evils of communism is a great disservice to the memories of the millions who died under communist regimes,” said Smith in a phone interview.

“It is also making it much harder to combat those communist regimes still in existence who are tormenting citizens, clamping down on free speech, and posing a danger to the rest of the free world,” Smith said.

The U.S.-based Victims of Communism Memorial Foundation is a nonprofit organization formed in 1994 by an Act of Congress to memorialize the victims of communism, educate younger generations about the nature of communism, and document evidence of its crimes.

Smith said education on the nature of communism is important, not only because of its crimes—many of which have still not seen justice, but also because it still exists in today’s world. And in countries including China, North Korea, Vietnam, and Cuba it is continuing its abusive legacy.

Smith recently returned from a monthlong trip to Hong Kong where activists are now protesting for democratic, free elections under threat of mainland China’s communist rule. He met with business leaders, human rights campaigners and leaders, student leaders and protesters, academics, and even police officers to gain a better understanding of the situation.

“The people of Hong Kong have a culture of liberty that they think is being threatened,” he said, adding that the protesters believe if they do not take a stand for free elections, “they’re afraid they may not be able to have another opportunity.”

At its core, Smith said, what is now unfolding in Hong Kong is just another case of a Communist regime attacking the freedom of a democratic state. He said, “it is China trying to curtail the freedoms of Hong Kong, which has been for decades a free society.”

Historically, communism has always created systems where choice and morality are governed by the state.

“The simple fact is that communism in the more than 40 countries that it was tried, once they took power they outlawed religion, outlawed free speech, they outlawed every other political party, they became totalitarian states, and they as a matter of policy targeted and killed significant portions of their own population in pursuit of ideological goals,” Smith said.

“The history is very clear on this,” he said. “Communism is the deadliest ideology in history. Communism is an enabling ideology for totalitarianism. In no case has communism come to power and instigated human dignity and flourishing.”

It is also an ideology that has taken deep roots in the modern world—and in countries like China the Party elite have created new state-approved versions of religions, and set in place state-run educational systems to regulate political thought.

A facade has been set in place over the ruins of religion and free thought, and through the masquerade of Communist state-run news outlets the world has been fooled.

He said that many people today are forgetting that China is still ruled by the Chinese Communist Party, and behind its projection of a growing economy is the same form of totalitarianism that has existed in every other communist regime—including its suppression of dissidents, forced labor, and tight regulation of free information from newspapers to the Internet.

What the Chinese regime is using, he said, is “state capitalism,” under which “you have no civic or political rights, but you have economic freedom—and people think that makes perfect sense.”

“This inability to see totalitarianism for what it is comes from an inability to recognize what is necessary for freedom and prosperity and a government that respects the basic rights of its citizens,” he said.

Smith is concerned that despite the well documented history of communism, and its totalitarian systems that still hold power in many countries of the world, people are forgetting its nature—and some, particularly among youth, are again promoting its ideologies.

“Our understanding of the history of the communist regime is very important for us maintaining a free society in the future,” Smith said.

“It’s a very odd thing that here in the United States we could go from fighting a decadelong Cold War where tens of thousands of American soldiers died protecting freedoms around the world,” he said. “We could go from all of that to forgetting that communism ever really existed.”