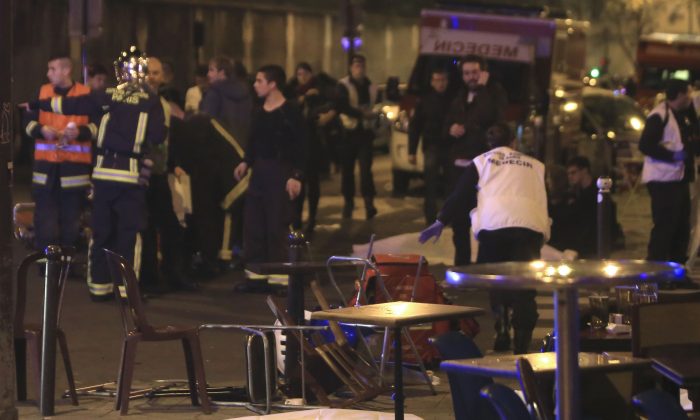 Emergency services attend the scene as victims lay on the pavement outside a Paris restaurant, Friday, Nov. 13, 2015. Police officials in France on Friday report multiple terror incidents, leaving many dead. It was unclear at this stage if the events are linked. (AP Photo/Thibault Camus)
Europe

Facebook activated its “Facebook Safety Check” for people with friends or family in Paris to help notify others about their safety.

It also allows one to mark someone else as safe.

“Quickly find and connect with friends in the area. Mark them safe if you know they’re OK,” it says.

A French police official said that top government officials including President Francois Hollande were headed to the Bataclan.

Two attackers were killed after a police assault.

At the same time, #PorteOuverte, which means #OpenDoor trended on Twitter, after the attacks.

“If you’re in Paris and trying to find shelter, browse the #PorteOuverte hashtag. People are welcoming you! Don’t stay outside!” one person tweeted.

France 24 said Parisian taxi drivers are turning off meters and driving people home or to safety, according to USA Today.

Hey tourists in #Paris if you need help or some place to sleep around Jussieu 5th arrondissement, my door is open. #PorteOuverte #OpenDoor

#porteouverte send me a message for a safe place in canal Saint Martin. Please be safe

Hi guys. If you need a shelter near République, pm me. #porteouverte
Plus, we have beers.

Witnesses called it a “massacre” and a scene of “carnage” at the Bataclan theater, it was reported.

President Hollande said in a televised statement of  the attacks: “We have mobilized all available forces to neutralize the terrorists.” The military was deployed, the borders of France were closed down, and a state of emergency was declared. He said security forces are assaulting a site in Paris after the attacks.

French President Francois Hollande declared a state of emergency and announced that he was closing the country’s borders. The violence spread fear through the city and exceeded the horrors of the Charlie Hebdo carnage just 10 months ago.

As well deaths at the concert hall, a police official said around 1 people were killed at a Paris restaurant in the 10th arrondissement.  Other officials said at least three people died when bombs went off outside a stadium, AP reported.

There was no immediate claim of responsibility for the attacks. It’s unclear how many attackers were involved.