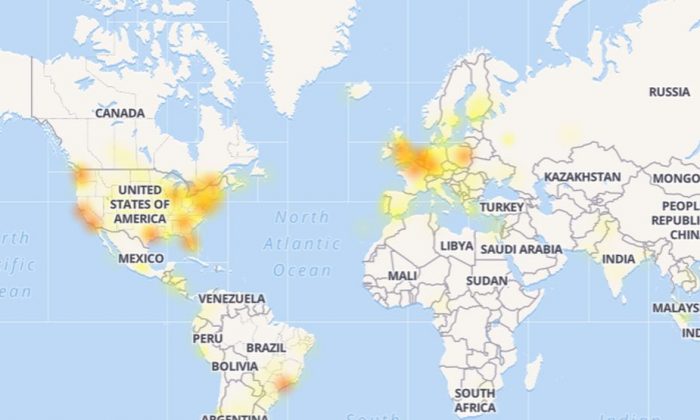 Facebook outages have been reported across the world on July 3. (Google Maps)
International

Facebook has confirmed that its site is experiencing problems after users reported outages.

“We’re aware that some people are having trouble uploading or sending images, videos and other files on our apps. We’re sorry for the trouble and are working to get things back to normal as quickly as possible. #facebookdown,” the company tweeted.

We’re aware that some people are having trouble uploading or sending images, videos and other files on our apps. We’re sorry for the trouble and are working to get things back to normal as quickly as possible. #facebookdown

Downdetector.com’s map shows Facebook’s reported outages, and they appear to be concentrated in the United States and Western Europe.

“Seems very selective on what loading and what’s not.🤔 Seems purposely done. Take this as a sign and spend time with your family and friends,” one person wrote.

“Wow cant believe Facebook has been down for this long, photos don’t show up, videos aren’t showing up or they disappear, you name it and its not working, From Rochester NY. Hope the fix it soon,” commented one person.

The problem when one company owns everything 🤦🏽‍♂️#whatsappdown #facebookdown #instagramdown

“Can’t see any pictures. Not uploading it just stops mid way,” added another.

At the time, the company blamed a “server configuration change,” and apologized for the outages.

Earlier, in 2010, Facebook experienced a 2.5-hour outage that at the time the company called its “worst outage we’ve had in over four years.”

“The key flaw that caused this outage to be so severe was an unfortunate handling of an error condition,” the company announced. “An automated system for verifying configuration values ended up causing much more damage than it fixed.”