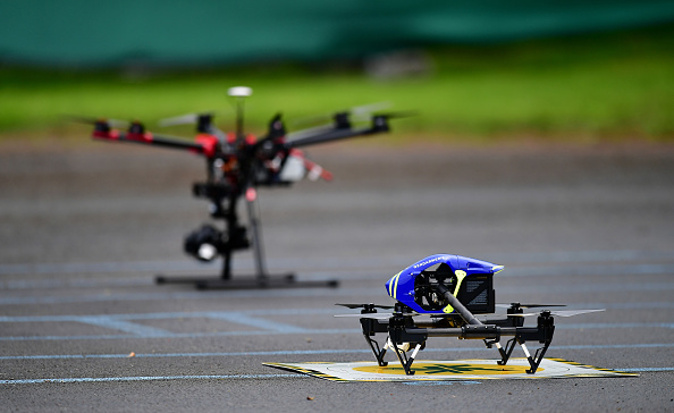 CHANTILLY, FRANCE - JUNE 15: Police drones are prepared during a training session at Stade du Bourgognes ahead of the UEFA Euro 2016 match against Wales on June 15, 2016 in Chantilly, France. (Photo by Dan Mullan/Getty Images)
Aviation News

FAA: Commercial Drones Get Nod to Fly. What Can We Expect?

The FAA released its first operational rules that allow for commercial use of drone aircraft in U.S. airways, June 21.

“We are part of a new era in aviation, and the potential for unmanned aircraft will make it safer and easier to do certain jobs, gather information, and deploy disaster relief,” said U.S. Transportation Secretary Anthony Foxx. “We look forward to working with the aviation community to support innovation, while maintaining our standards as the safest and most complex airspace in the world.”

The new rules target businesses, so drone hobbyists are not included. Hence, the new regulations will have little impact in private drone cases, such as the lawsuit involving a teen that equipped his drone to roast a Thanksgiving turkey.

There are several key tenets under the new rules. First, drones in operation must be less than 55 pounds. Second, the drone operator must be at least 16 years old. Third, the operator must have a remote pilot certificate.

The certificate can be obtained either by passing an aeronautical test at an FAA testing center, or by having an existing non-student Part 61 pilot certificate. In the latter case, the persons must have completed a flight review in the past 24 months and must take an online training course for drones provided by the FAA.

If the person doesn’t possess such a certificate, they can still use a drone if under the direct supervision of someone with a certificate. The FAA posted a page facilitating certificate applicants.

One of the main safety concerns with drones—these low-flying, metal objects—is the potential for injuring on people. To allay against this concern, the FAA stipulates that the aircraft must remain within the operator’s visual line of sight; that operations are restricted to daylight hours; and that aircraft are not permitted to be flown over the heads of unguarded bystanders.

Privacy is another major concern related to the mini-aircraft. The new rules don’t deal with privacy specifically, but the FAA is making efforts on this issue through an education campaign about privacy. In the campaign, the agency will look to inform local and state governments about drone privacy issues, as well provide resources to drone users during pilot certificate registration.

The FAA said industry estimates indicate the new rules could generate more than $82 billion for the U.S. economy and create more than 100,000 new jobs over the next 10 years.

Even before the new rules appeared, Amazon had already been flirting with the idea of drone deliveries. On Quora, Daniel Dyck, a licensed private pilot, names Amazon, Google, and Walmart as companies that could potentially employ the service, musing on possible Google concoctions, such as live Google maps and regional wifi.

Dyck also mentions the “potentially risky” adoption of drones into the police, defense, and military complex in the forms of monitoring police drones, lethal military drones, and border drones.

The new regulations do not address the various negative ends drones can be used for. There have long been concerns about the convenience of the aircraft to collect private information as well as facilitating burglaries or child abduction.

But some experts say taking the first step is critical.

“I regard it as a significant milestone,” said Association for Unmanned Vehicle Systems President Brian Wynne, according to Dallas Morning News. “We’ll accelerate the process of understanding what the risks are that will allow us to move on to more complex operations.”

The new regulations will take effect in August.