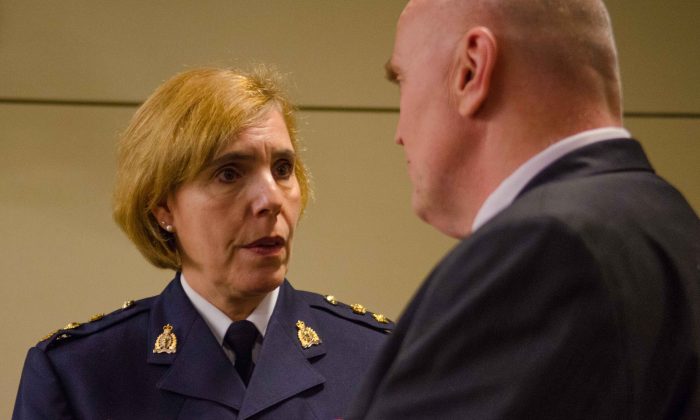 Supt. Shirley Cuillierrier speaks with Sen. Vern White prior to her testimony at the Senate’s Standing Committee on National Security and Defence on Nov. 17, 2014. (Matthew Little/Epoch Times)
Canada

Violent extremism must be countered at the community level, senators told
By Matthew Little

OTTAWA—Canada was shaken last month by the killing of two soldiers, one in Ottawa and one in Quebec. But in the weeks that have followed, police report an unexpected and positive shift.

While political leaders grapple with the question of how to balance security against rights like privacy, many in Canada’s Muslim community have begun to mobilize against a violent and radical ideology.

Police across the country are reporting that people are coming forward, engaging police about potential radicalization and providing the community support experts say is critical in arresting the threat posed by potentially violent radicals.

“It’s kind of like the sounding bell went off for Canadians,” says Superintendent Shirley Cuillierrier, the director general of partnerships and external relations for the RCMP.

Cuillierrier heads the RCMP’s effort to reach out to communities and build the relationships that security experts say are key to learning about potential terrorist threats and preventing them.

“There is a new consciousness out there right now where religious leaders are coming forward to say ‘enough.'”

She says that has translated into a surge of people contacting the police with information and a proactive effort to address radicalization within mosques.

That shift could be key to Canada avoiding future attacks.

Unlike previous large-scale terrorist attacks, ISIL is using propaganda and social media to inspire lone actors to launch attacks, and implicitly encouraging them to do so secretly to avoid intelligence and law enforcement agencies getting wind of it.

“Do not ask for anyone’s advice and do not seek anyone’s verdict. Kill the disbeliever whether he is civilian or military,” said ISIL spokesman Abu Muhammad Al-Adnani in a recording posted online in September.

That was the same recording that singled out Canada among a list of targeted countries, and was issued just weeks before October’s deadly attacks claimed the lives of Cpl. Nathan Cirillo and Warrant Officer Patrice Vincent.

Lone actors are extremely difficult for police to uncover. When they do find potential extremists, it takes 32 people to monitor them 24/7—an impossible drain on resources. The only solution is for communities to step in.

That was the message several sources delivered to the Senate’s national security committee on Monday, Nov. 17.

“And, with support, they are better placed to take meaningful and positive action to address those early warning signs before they become problems.”

“As a society, the task facing us is to counter violent extremism at the community level,” Robertson added. “As a government, our task is to ensure that communities are equipped with an array of options in support of prevention and intervention.”

While the RCMP’s effort to counter violent extremism has come under fire for not preventing the attacks, there are signs the message has gotten out.

Reaction has come swiftly from some communities, with the Ahmadiyya Muslim Youth Association being particularly active in organizing events across the country.

The group wants to stem the radicalization of that small segment of Muslim youth that seem particularly vulnerable to ISIL’s brand of brainwashing.

Tayyab Pirzada is one of the people organizing those events.

“I do think more Muslims are waking up to the threat of radicalization in their communities,” he said in an email interview.

His group is staging “Stop the crISIS,” a series of events at universities, community centres, and libraries across the country that include live presenters and video production.

“We hope to eventually partner with the RCMP as well as education boards in order to help curb radicalization,” said Pirzada.

Sohail Raza with the group Muslims for Tomorrow believes the issue must be taken directly to the mosques where anti-Western thought can be prevalent.

He says radicalization has been going on for years and sometimes the RCMP partner with organizations that have questionable ties or direct connections to extremist groups.

There remains a pervasive problem of anti-Western thought in too many mosques, he said.

“These are deep problems in the Islamic community.”

“I believe we have an elephant in the room that everyone is afraid to acknowledge,” she said. “We are talking about extreme violence here in Canada, but the world is referring to it as extreme jihadist Islamic terrorism.”

For the Department of Public Safety and the RCMP, it doesn’t matter where the problem comes from—the way to address it is through targeting behaviours.

Cuillierrier says the RCMP does not and will not target religions or ideologies but instead focuses on the behaviours that extremists exhibit. It’s an approach that preserves the Mounties’ ongoing efforts to build trust in the Muslim community.

If that trust is damaged, the information now flowing back to police could be cut off and the trust necessary for successful outreach could be lost.

“Enforcement is one tool, but because this problem has grown so fast we know we can’t arrest ourselves out of this. It’s something where we have to think of doing the business differently. We’re going to be busy,” Cuillierrier says.

“I really believe in the strength of community. When they decide to come together with police, health, school teachers, people can really mobilize and bring change. They really can. Will we be able to ever stop this threat? What I want to focus on is stopping one threat, stopping two threats. I am going to take them incrementally and I believe we can.”