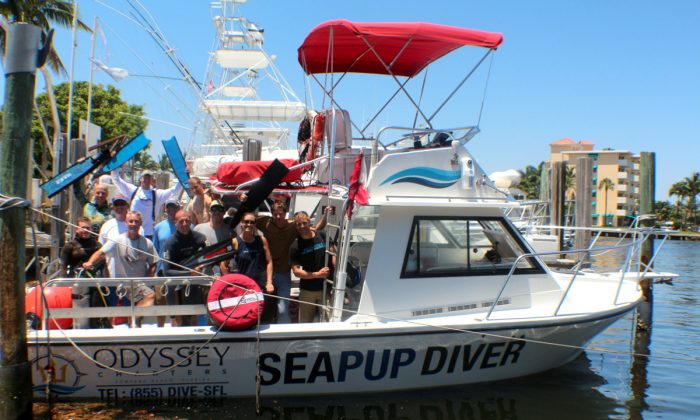 Exploring the Ocean on a Breath of Air

It is illegal in most of Europe to spear fish using Scuba gear. The sport is practiced by free divers that have disciplined themselves to dive deep and hold their breath for several minutes. The late Jacques Mayol, protagonist in the fictional film depicting his life, ‘The Big Blue,’ started free diving on a breath of air as a young man. His prowess made him a legend. He described his techniques in the book ‘Homo Delphinus,’ ‘Dolphin Man.’

While Jacques Mayol set many world records in the pioneering days of free diving, his record, like any record, was broken. Mayol returned and conquered the depths again and again besting his own and competitors’ records. He used Yoga to relax and control his breathing prior to a dive. In later years, while he instructed protegees, he continued breath hold diving working with dolphins underwater. It was an amazing combination of human interaction with another species in the wild.

For 37 year old Martin Stepanek, his breath hold diving is also legend. “This was a twelve student group. Most hit a hundred feet, some just under at 97 feet,” he said. Martin retired from free diving competitions after diving to 400 feet, self-propelled, on a single breath of air. His divers came off ‘Sea Pup,’ at the dock next to the Pompano Dive Center. The divers were exultant.

“We dove deeper than the Scuba divers,” one of the divers said. The group posed for pictures on the Pompano Dive Center boat. Their gear was unique: long fins, low compensation masks, some wore camouflage colored wet suits of spear fishermen.

The Pompano Dive Center offers charters in Florida’s offshore ocean north and south of the Hillsboro Inlet. Their snorkeling trips are popular as are Scuba diving adventures to shipwrecks sunk as fish havens and reefs. While diving on a breath of air to a hundred feet and more may sound daunting, it has become a popular pursuit. Despite the fact that spearing fish with tanks is legal in Florida, many free divers consider it more sporting to free dive.

“It’s a course. Something you can learn. We are born with the capacity to dive to a hundred feet. It is how you breathe, how you swim,” Stepanek said. He described how divers come into his course able to hold their breath for a minute and swim down to a depth of 40 feet.

“Three-and-a-half days later they can hold their breath for 3 to 4 minutes and dive to a hundred feet,” this breath hold dive instructor added.

Stepanek has been teaching for 14 years. He created Freediving Instructors International when he retired from competition. “I competed and set more than a dozen world records. I still had to pay my bills so I began teaching. Teaching became my passion to share knowledge,” he said.

Divers on the dock were waiting for the morning dive excursion to arrive on ‘Sea Siren,’ another Pompano Dive Center boat so they could load their gear aboard. Many asked the intrepid free divers questions. Free diving and snorkeling is part of any Scuba course, however, once basic skills are learned, instruction centers on use of tanks and regulators.

Captain Matt Heath guided ‘Sea Siren’ against the dock next to the Pompano Dive Center, on Riverside Drive, just under the Atlantic Avenue Bridge. Divers on the morning trip came off chatting about their dives on two shipwrecks. They too were curious about the free divers posing for pictures with Martin on ‘Sea Pup.’ Tanks were hauled on a dolly by Captain Matt, crewmen Morgan Cheek and Fernando Mello while ‘Sea Pup’s’ captain smiled. No heavy tanks to unload.

It was a beautiful day on the ocean. A slight north current from the Gulf Stream whisked divers along the ledge of a reef 50 feet down. The second dive was on a ship sunk as an artificial reef in 70 feet of water. A large Goliath grouper swam close inspecting Scuba divers on the shipwreck, startled by their exhaust. Perhaps free divers like Jacques Mayol and Martin Stepanek and enthusiasts for the sport could have joined the big fish underwater without intrusion of bubbles. Ocean exploration is fascinating no matter how you dive.