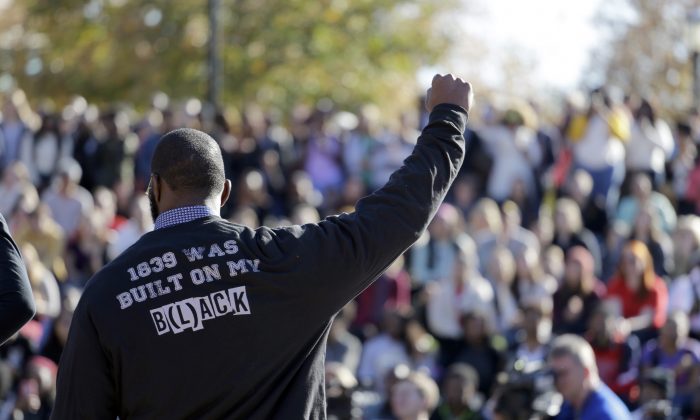 In this Nov. 9, 2015 file photo, a member of the black student protest group Concerned Student 1950 gestures while addressing a crowd following the announcement that University of Missouri System President Tim Wolfe would resign, at the university in Columbia, Mo. (AP Photo/Jeff Roberson)
US

DETROIT—Protests by University of Missouri black students that forced the school’s administration to address racism and other problems mirror efforts decades ago that led many majority white schools to create African-American studies and other programs.

But those programs and some ethnic studies departments across the country are struggling with funding, low-staffing and dwindling student enrollment, according to some experts.

African and African-American Studies at the City University of New York’s Lehman College in the Bronx once had 10 full-time faculty members, but now has only five full-timers and one substitute assistant professor whose term will expire next June, Chair and professor Mark Christian told The Associated Press.

“We rely heavily on adjuncts to teach classes, and even this budget is under constant threat,” Christian said. “I imagine most departments in Africana/black studies around the nation have similar problems with a lack of investment from the administrations.”

Officials at San Jose State University in California cited the struggle by its African American Studies Department to attract enough students to fill upper division classes and having only one full-time faculty member in a proposal to merge the program into another department.

Blacks and Latinos at Lehman make up more than 95 percent of the campus’ student population, while about 90 percent of the faculty is white, according to Christian.

“I’m talking about the Bronx in New York City, not Omaha, Nebraska!” he said. “This is a poor statistic for any diversity measurement. More importantly, in the nearly five years I’ve been here things show no sign of improving.”

Adding black professors was among the demands made by black Missouri students who also complain that school officials have not done enough to address incidents of threats toward blacks on campus. Thirty black members of Missouri’s football team joined the protest movement by vowing not to take part in team activities until University of Missouri System President Tim Wolfe was gone. Wolfe resigned Nov. 9.

Marches and other demonstrations of solidarity were held at Yale, the University of Michigan, Smith College in Northampton, Massachusetts, New York’s Ithaca College and other schools.

“This recent spate of protests should convince administrations that students want to see more of their experience reflected in the classroom, whether through curriculum or people that actually teach these classes or do research,” University of Missouri Black Studies Department Chair Stephanie Shonekan told The AP.

Detroit-area attorney Naomi Oglesby minored in the program while a student at Missouri and argues that the field of study remains relevant.

“This curriculum has shaped my perspective, ideology, interpretation of other races and cultures, gratitude for my past, self-determination for my future, and my identity today,” said Oglesby, who is black.

Changing views of students are relative to “the times they are living in,” Christian said.

“Look at the protests. It looks like a throwback to the 1960s, and these young people are very serious,” he added. “They are very conscious, educated and know that they’re getting a raw deal. We need to allow these young people to have an education that represents a good part of their cultural heritage.”

“Not just African and African-American students, its Latinos and Latinas, Native American students — any students that the original curriculums of higher education are not built around,” Perry said.

“Really, who holds the power and sets the political tone are faculty,” he said. “They are there for the long haul. Individual students and administrators come and go. Tenured faculty members set the academic tone and the majority of culture on the campus.”