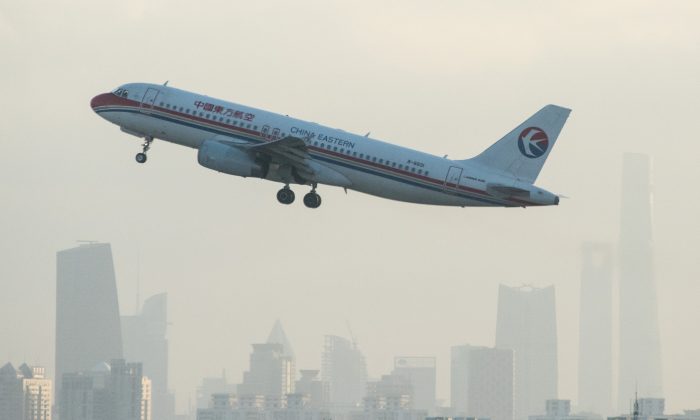 A plane from Chinese airline China Eastern departs from Hongqiaou Airport in Shanghai in front of the skyline on February 8, 2015. UniGroup Relocation, an international moving company, recently conducted a study showing that twice as many expatriates left China than arrived in 2014. (Johannes Eisele/AFP/Getty Images)
China

Once a popular destination for foreign employees looking to do business with over a billion consumers, China isn’t looking so hot anymore.

UniGroup Relocation, an international moving company, recently conducted a study showing that twice as many expatriates left China than arrived in 2014.

The results were obtained from the firm’s customer data. UniGroup Relocation moves over 260,000 families a year worldwide.

Multiple factors could be behind the dwindling expat flow. UniGroup’s report didn’t mention the Chinese regime’s politically-charged anti-corruption campaign, but former expats and those planning to leave the country told the Wall Street Journal’s China Real Time that the uncertainty and business disruptions caused by the Xi administration’s campaign influenced their decisions.

Factors mentioned in the UniGroup report included expiring work contracts, a rise in living costs, a general improvement in the American and European economies, and severe pollution.

Neither has the Chinese economy been doing particularly well in recent years, the company reports. Slow growth since the 2009 financial crisis has cut the profitability of multinational businesses operating in China. As Chinese manufacturing and labor costs rise, some firms are relocating to other developing nations such as Malaysia and Vietnam.

A management director at UniGroup told China Real Time that the company made some “mass moves” of corporate staff from China to Malaysia, reflecting shifting business attitudes.