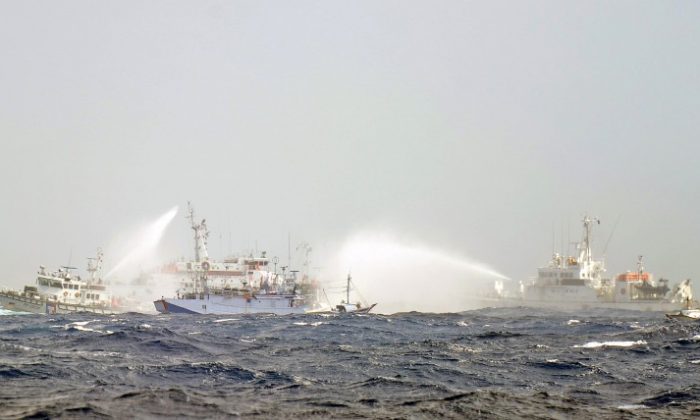 Japanese and Taiwan Coast Guard vessels use water cannons as they clash near the disputed Diaoyu/Senkaku islands in territorial waters in the East China Sea on Sept. 25, 2012. Military spending has outpaced strategy and the new status has given those in the armed forces a confidence that does not bode well for the region. (Sam Yeh/AFP/Getty Images)
China

As the People’s Republic of China’s economy tightens, so will its aggressive antics increase, particularly in the South and East China seas, predicts China expert Gordon Chang.

According to Chang we are seeing the end of China’s three-decadelong growth: China’s economy is slowing fast; the leadership is fractured; and the power transfer, leading up to the 18th Party Congress, was anything but smooth. Chinese people, too, are openly disdainful of the system, taking to the streets and to social media sites en masse to protest.

Rather than an Arab Spring, however, Chang believes, the military is already moving in to fill the power gap, exerting more influence on foreign policy and flexing its muscles in the region.

“There have been hints over the last week about the military really getting a lot of control after the 18th Party Congress,” Chang said in a phone interview.

Chang, a lawyer and author of the 2001 book The Coming Collapse of China, has lived and worked in China and Hong Kong for just under two decades. He credits China’s economic boom to a combination of timing, luck, and blatant scamming of the international system.

Former leader Deng Xiaoping’s “reform and opening up” policies, coincided with the end of the Cold War and a reduction of political barriers to international trade. With a large, mobile, and keen workforce, China was quick to meet the demands of an open international market place.

When China joined the World Trade Organization (WTO), Chang, expected China would be forced to play by the rules, growth would be reined in, and the leadership would bear the brunt of popular discontent.

The international community, however, was largely forgiving of the Chinese regime, possibly in the hope of continuing reform. The developed world turned a blind eye to trade and intellectual property transgressions, tolerated currency manipulation, and declined to confront China on domestic market protection.

That “sweet spot” for China is now over, says Chang. “China is no longer reforming, and the benign external environment has turned unwelcoming as the global economy erodes.”

“China’s economy could already be in recession,” he said.

China’s biggest problems, however, are not economic but political.

The once in a decade handover of power, this time from Hu Jintao to new leader Xi Jinping, is normally so scripted and managed as to be boring. But this year the November handover, was fraught with rumors of a coup, factional fighting, murder, treason, and even the disappearance of the presumptive leader.

The chaos is largely a result of fighting between the old guard Maoist proponents of Jiang Zemin’s Shanghai faction, which include the ousted Bo Xilai and marginalized security czar Zhou Yongkang, and Hu Jintao’s Communist Youth League faction.

Both factions have used the military to suit their needs, empowering the People’s Liberation Army (PLA) politically and in the eyes of the public.

“There are going to be more military officers appointed to official committees and they are going to start wielding much more effective influence on Xi Jinping,” said Chang.

Military spending has outpaced strategy and the new status has given those in the armed forces a confidence that does not bode well for the region. Young officers have developed a swagger and an agitation for action, which Chang likens to the young Japanese officers of the 1930s.

“They have become dangerous, arrogant, and often bellicose,” he said, “they are spoiling for a fight.”

Chang believes it is the military’s influence that is behind aggressive foreign policy positions in the East and China seas. By claiming much of the disputed maritime territory as its own however, China has managed to pick fights and alienate many of its neighbors.

It has particularly inflamed relations with Japan, stoking up violent nationalism both domestically and abroad by claiming the small, uninhabited but potentially resource-rich Senkaku Islands, which are known as Diaoyu in China.

The Japanese Defense Ministry reported that two Chinese destroyers were circling the area around the islands.

“If they are actually sending big ships there then that is a big problem,” said Chang.