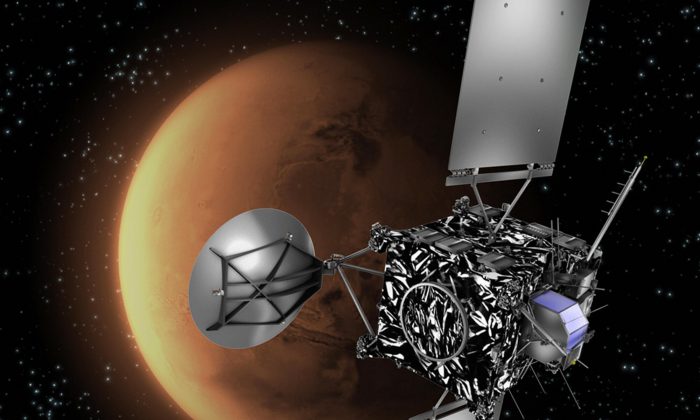 ExoMars Probe Being Prepared for Blastoff to Mars

The ExoMars Trace Gas Orbiter, commissioned by the European Space Agency and Russian Federal Space Agency, is slated to blast off into space on March 14 for an Oct. 19 landing on Mars.

The spacecraft also carries a small lander named Schiaparelli that will touch down on the surface of the red planet, the ESA said.

If there was ever a mission which had a good chance of making a discovery regarding possible life on Mars then ExoMars is it.
— Jorge Vago, ExoMars Project Scientist

The probe, which will blast off from the Baikonur Cosmodrome in Kazakhstan, is carrying instruments to hunt for methane gas emissions which might signal the presence of life. It will then attempt to determine what causes them.

“These missions are specifically designed to see if life has ever existed on Mars and if it still survives,” Professor Andrew Coates, deputy director of University College London’s Mullard Space Science Laboratory, told the Express. “Methane is one of the key gases we are looking for.”

He added: “We know from other missions that it is coming from under the surface, and there are only two possible sources: geothermal activity or, mind-blowingly, some form of life, almost certainly microbial.”

“The emerging picture is that soon after Mars formed, around 4.6 billion years ago, it was a very suitable place for life.”

UFO Watcher Claims to Have Found a Handgun on Mars (Video)

“If there was ever a mission which had a good chance of making a discovery regarding possible life on Mars then ExoMars is it,” said Vago.