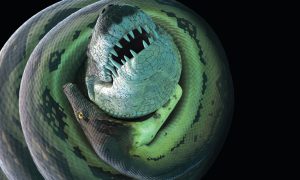 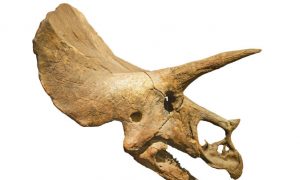 Did Humans Walk the Earth With Dinosaurs? Triceratops Horn Dated to 33,500 Years
0 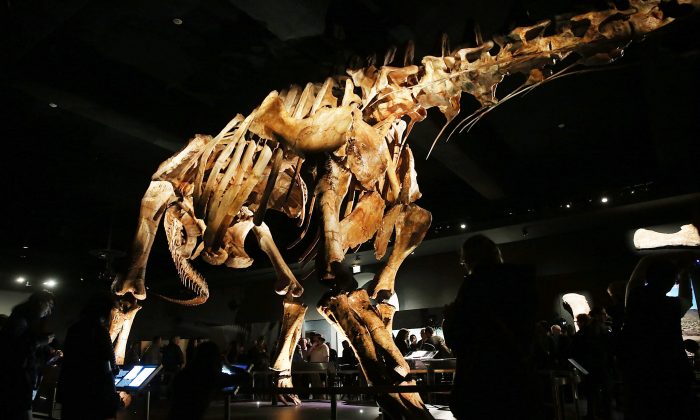 A replica of one of the largest dinosaurs ever discovered is unveiled at the American Museum of Natural History on January 14, 2016 in New York City. (Spencer Platt/Getty Images)
archaeology

Exhibit Opens for Titanosaur, One of the Largest Dinosaurs Ever

The fossil exhibit for the Titanosaur, one of the largest dinosaurs ever, opens at the American Museum of Natural History in New York City on Friday.

The 122-foot-long skeleton is so large that it can’t fit entirely in the usual exhibition area, and its neck has to extend to the elevator banks.

New #Titanosaur at the @AMNH is the definition of awesome! https://t.co/YRSYSjsKQO pic.twitter.com/DFZiUUVlmN

The #Titanosaur is NOW OPEN at the American Museum of Natural History in NYC! Plan a visit: https://t.co/SZzANkZSap pic.twitter.com/Hshc7lvYa7

What’s shown at the museum isn’t the real fossils, which are too heavy to mount, but 3D fiberglass replicas, which took 6 months to create. Five of the real fossils will be on display individually at the exhibition hall.

How To Build A Titanosaur: Time-lapse

#HowToBuildATitanosaur: After all the excavating, scanning, printing, and welding, the final step of building a #Titanosaur is assembling the gigantic pieces of the cast in its new Museum home. See the Titanosaur come together in this amazing time-lapse video, then visit the new Museum icon tomorrow, January 15, its first day on view for the public: http://bit.ly/231Npgj

Posted by American Museum of Natural History on Thursday, January 14, 2016

The fossil was discovered by paleontologist Egidio Feruglio in early 2014, according to the BBC, too recently for it to have received a real scientific name. The Titanosaur lived in Patagonia between 95 and 100 million years ago, is estimated to weigh around 140,000 pounds, and it’s a candidate for the largest dinosaur ever.

It’s difficult to know for sure which dinosaur is the largest ever because usually only a fraction of a dinosaur’s fossils are ever found. We only have 40 percent of the Titanosaurus’s bones, Mark Norell, chair of the paleontology division at the Museum, told Wired, and much of the size of the animal is extrapolated from its thigh bone.

The replica of the Argentinosaurus at the Carmen Funes Museum, at 130 feet long according to the Science Times, in Argentina is even larger than the Titanosaurus on display in New York. The Argentinosaurus holds the informal title for the largest dinosaur ever.