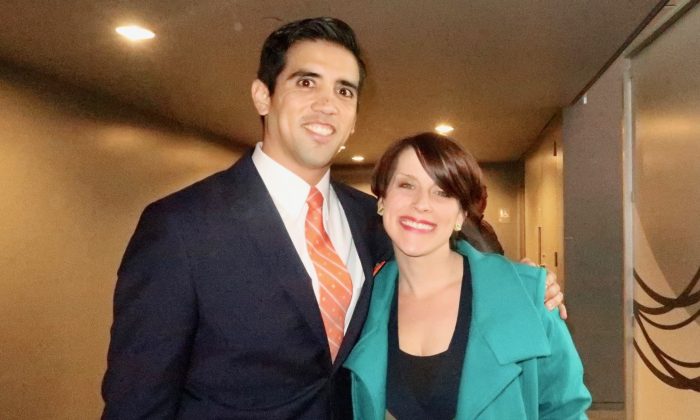 DALLAS—The Saoits had watched Shen Yun Performing Arts in 2017 and liked it so much that they came back to see it again.

Matt Saoit is an executive with IMGA and served in the marines. Jennifer Saoit is a healthcare executive who manages medical practices.

What came as a surprise to the couple is all the stories were new. No sooner than Shen Yun finishes touring the world each year, the classical Chinese dance company quickly gets to work at creating and rehearsing the production for the next year, drawing new stories and dances from the immense history.

“They change up the dancing, a lot of the costumes, the choreography, the music,” said Mr. Saoit. “So it was really really interesting to find that out when we first got here, because I was expecting to see the show that I saw in 2017, and we just loved it so much.”

Besides watching a new performance, the pair also had a new view, one that showcased the precision of the dances.

“We’re sitting in different seats actually, so we’re sitting in the box this year,” he said. “And to be able to see with a little bit of depth on the stage, you can see just how tight the choreography is, between everyone and the levels of the dancers. It’s very good.”

Shen Yun features choreography, dancing, live orchestra of Chinese and Western instruments, elaborate costumes, solo performances, and a patented digital backdrop. From some seats you can peer into the orchestra pit and watch the musicians and see the instruments closely, from others you can take in an eyeful of the choreography, and from some seats you can see that even the expressions of the Shen Yun dancers are disciplined and precise.

Mr. Saoit also was thoughtful about some of the deeper implications of the performance.

“It was also very interesting to see the influence of communist China, and them [Shen Yun] giving us the spiritual message,” he said. The influence he was referring to has to do with why Shen Yun cannot perform in China today.

Based in New York, Shen Yun’s mission is to revive the traditional Chinese culture, which is forged over 5,000 years of Chinese history, and highly spiritual. Under the rule of the communist regime in China it has been suppressed in China through violent campaigns such as the Cultural Revolution. Many people in China are still persecuted by the Chinese Communist Party.

“It’s terrible that that’s going on in China right now,” said Mr. Saoit. “And the idea that someone wouldn’t be able to have the opportunity to practice their faith is very, very sad.”

His wife, Jennifer, enjoyed seeing the new performance as well.

“I think the sleeve dance was actually my favorite so far, “she said, referring to a dance where the dancers’ long water sleeves are used as unique props. ” It’s just one of those ones that you get kinda wrapped up—no pun intended—it’s just really pretty.”

She applauded Shen Yun’s mission to revive the culture.

“Actually I really enjoyed that,” she said. “It’s not something you get to see a whole lot of. So I think it’s very interesting and very intriguing, and I really appreciate the effort that they take to put in to do so.”