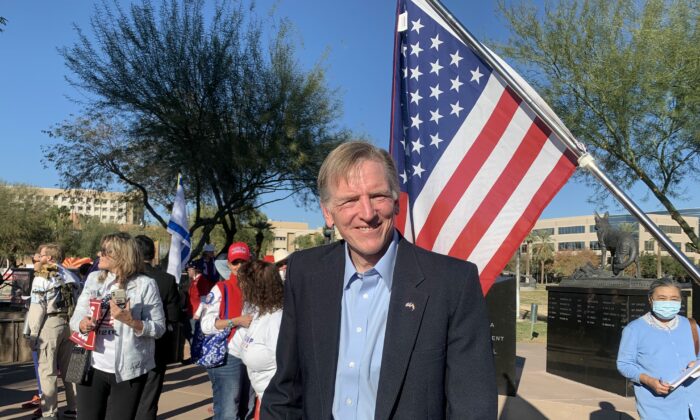 Rep. Paul Gosar (R-Ariz.) told The Epoch Times that several Democrats should be stripped of their committee assignments if Republicans regain control of Congress in the 2022 midterm elections.

In November 2021, Gosar was censured and taken off committees after his Twitter account shared an anime video in which a cartoon version of the congressman attacked cartoon versions of President Joe Biden and Rep. Alexandra Ocasio-Cortez (D-N.Y.). The expulsions came several months after Rep. Marjorie Taylor Greene (R-Ga.) was removed from committees based on her actions prior to taking office.

“If you have a problem with our graphics, that’s not something you ought to censure,” Gosar said. “If you know anything about anime, they’re destroying the policy”—Biden and Ocasio-Cortez’s approach to the southern border, where illegal entries have surged—“not the person. The person stands for the policy.”

He added that he “could see where people could get a problem” with the clip, telling The Epoch Times the Twitter account that posted the video was managed by his staff and he didn’t view the clip prior to its release.

“When they censured me, all my friends stood in the well, saying: ‘We defy you. We don’t think what you’re doing is right. Good luck at what’s coming: What goes around comes around.'”

Gosar emphasized that the removal of certain Democrats shouldn’t be a tit-for-tat over his and Greene’s experiences, but detailed potential conflicts of interest and other concerns he has with several representatives.

Swalwell has been criticized by Republicans for his connections to accused Chinese spy Fang Fang. House Minority Leader Kevin McCarthy (R-Calif.) sought to remove Swalwell from his position in the House Select Committee on Intelligence in May 2021, but Democrats in the House voted the resolution down.

Schiff chairs the House Select Committee on Intelligence. In 2019, then-President Donald Trump accused the congressman of leaking classified information, telling reporters it was why he and his team didn’t notify Schiff’s committee prior to the Oct. 26, 2019, raid against ISIS that killed Abu Bakr al-Baghdadi. In August 2020 Schiff denied leaks were coming “from within congressional committees, calling the accusation ‘another falsehood’” from the former president, according to The Insider.

Gosar later added Rep. Maxine Waters (D-Calif.) to his list of Democrats who should be removed from committees.

In 2018, when Republicans controlled both the House and Senate, Waters urged a crowd of her supporters to “push back on” members of Trump’s team in public and “tell them they’re not welcome anymore, anywhere.”

Judicial Watch’s Tom Fitton asked (pdf) the Office of Congressional Ethics to investigate whether Waters’s remarks broke any rules in the House, and Rep. Andy Biggs (R-Ariz.) introduced a resolution to condemn and censure her.

At that time, Waters was the ranking member of the House Financial Services Committee. Today, she chairs it. Biggs’s resolution apparently died in committee.

The Epoch Times has reached out to Swalwell, Schiff, Omar, and Waters for comment.

Democrats ‘Want to Cripple And Destroy The Mining Process’

While serving on the House Energy and Natural Resources Committee, Gosar earned a reputation for his knowledge of mining operations across Arizona and the wider United States.

He believes Democrats are preventing domestic mineral exploration at a time when the push for electrification and green energy is dramatically increasing the need for copper, manganese, and other metals.

“They want to cripple and destroy the mining process, no matter where it is or what it is, in the United States,” he said. “Even deals that we’ve consummated in the past—whether it be Twin Metals or Resolution Copper—they’re all trying to renege on them and make us more dependent upon critical and rare earth minerals from China and from Russia or some of our other adversaries.”

“It’s an all-out assault on mining and energy utilizing the eco-terrorists and environmental groups to actually destroy it,” Gosar said.

Arizona, Gosar noted, has no shortage of valuable mineral resources. He cited the La Paz Scandium and Rare Earths Project in La Paz, Arizona. When scandium is combined with aluminum, the resultant alloy is both strong and light.

“It’s going to revolutionize aviation and transportation, whether it be a green automobile or an airplane or a gas-fired combustible engine,” he said.

As Gosar sees it, many of the same representatives pushing for green technology are simultaneously undercutting it by thwarting new mines.

“They talk about mining as if it’s back in the 1800s,” he said, rattling off examples of ways mining has become safer—for instance, a liner system to prevent toxic chemicals from leaking into subsurface water.

“They want this green energy, but they don’t want to do anything that actually benefits it, whether it be the rare earths that are in the solar cells or the copper that’s in the wind turbines. They’re not even looking at recycling and those aspects—and these are some of our toxic elements.”

Gosar senses major potential for solar power in Arizona, the sunniest state in the country. Yet as utility-scale installations sprout up across the state, encroaching on farmland, the power source’s drawbacks and uncertainties also have drawn attention.

He named some potential costs: It kills birds, heats up nearby land, and, depending on panels’ actual lifespans, could generate significant quantities of toxic waste.

“We have to be truthful: the best use of solar for the individual is really hot water,” he said, adding that he used a solar heat exchanger system in his own house: “We did it because I had a child that was very asthmatic, and we didn’t want to have the constant heating and cooling of air.”

“That gives them access to the grid, so we’ve got to come up with some checks and balances.”

Describing his plans for 2022, Gosar said he hopes to advance what he sees as the principles undergirding the 10th Amendment (“The powers not delegated to the United States by the Constitution, nor prohibited by it to the States, are reserved to the States respectively, or to the people”) by helping states challenge the federal government over land-related issues.

One of his concerns is the funding of Payments in Lieu of Taxes, intended to offset the tax revenue that states miss out on when nontaxable federal land takes up their territory.

Gosar is off the Energy and Natural Resources Committee, at least for now—McCarthy has said both Gosar and Greene will be given back their committee assignments if the GOP claims the House. He also said he’s still in constant contact with his colleagues on the committee.

“We’re not going away,” Gosar said. “What just happened is they liberated me. Now I can go to any committee that I find reason and have interest in—whether it be judiciary, whether it be natural resources—so it gives me a unique opportunity to exploit that.”