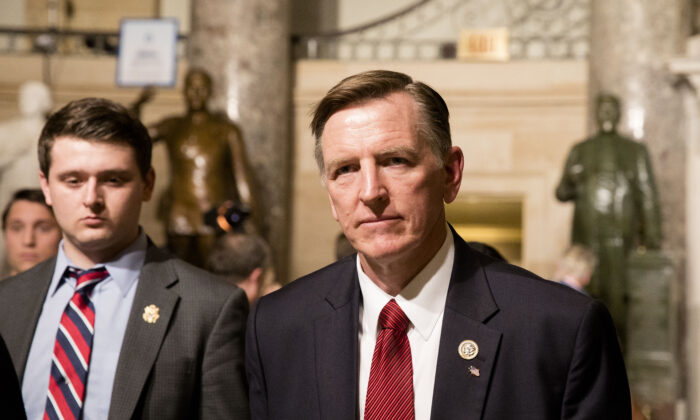 Rep. Paul Gosar (R-Ariz.) shared a video on Twitter with his face overlaid on the main character of an anime show striking down a foe whose face was overlaid with the face of Rep. Alexandria Ocasio-Cortez (D-N.Y.) as scenes of current U.S. events play out in the clip.

“Any anime fans out there?” asks Gosar in the caption. Twitter has marked the 1 1/2 minute video as “hateful conduct,” but left it accessible because it “may be in the public’s interest.” People will not be able to like, reply, or retweet.

The video is edited with anime-like special effects and typical music at the start. Views of the U.S. Capitol building quickly shift to migrants crossing the border and Border Patrol. Words like “drugs,” “crime,” “poverty,” “murder,” “gangs,” and “trafficking” are displayed alongside Japanese characters.

Then comes the anime shots, taken from “Attack On Titan,” with Rep. Gosar’s face superimposed on the main character, Eren Jaeger, who along with anime versions of fellow conservative Reps. Marjorie Taylor Greene (R-Ga.) and Lauren Boebert (R-Colo.) flips and strikes down a giant with Ocasio-Cortez’s face. The character then flies towards another giant, Joe Biden with outstretched double swords.

The video ends with clips of Border Patrol and photos of House Speaker Nancy Pelosi, Dr. Anthony Fauci, head of National Institute of Allergy and Infectious Diseases, and former President Donald Trump, among others.

“Attack On Titan” is a story about a group of soldiers who live in walled cities that are under attack from man-eating giants who attack and consume the population. Political parodies of the popular anime can be found on social media and video sharing sites.

“So while I was en route to Glasgow, a creepy member I work with who fundraises for Neo-Nazi groups shared a fantasy video of him killing me And he’ll face no consequences bc @GOPLeader cheers him on with excuses,” she wrote, referring to House Minority Leader Kevin McCarthy (R-Calif).

“Everyone needs to relax,” she said in a statement, dismissing claims that the video glorified violence. “The left doesn’t get meme culture. They have no joy. They are not the future. It’s a cartoon. Gosar can’t fly and he does not own any light sabers. Nor was violence glorified. This is about fighting for truth.”

According to Newsweek, the clip has been viewed more than 1 million times as of Monday morning.

Based on data from the Customs and Border Protection agency, patrol agents have apprehended 1,666,167 illegal immigrants along the southwest border in fiscal 2021—breaking all records since the agency was formed in 1925 (when 22,199 illegal aliens were arrested).