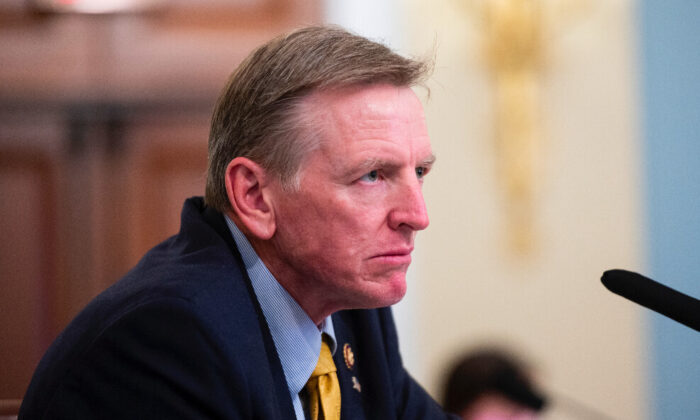 In a Wednesday vote, the House decided to censure Rep. Paul Gosar (R-Ariz.) over a since-removed anime video that the congressman posted to his Twitter page earlier in the month.

The House motion to censure Gosar strips the congressman of his two committee assignments on the Committee on Oversight and Reform and the House Committee on Natural Resources.

The video was an edit of the popular anime “Attack on Titan” series that portrayed Gosar slaying a “Titan”—giant human-eating monsters in the show—that was edited to have Ocasio-Cortez’s face.

Ocasio-Cortez responded to the video in a tweet of her own, calling Gosar “a creepy member I work with who fundraises for Neo-Nazi groups shared a fantasy video of him killing me.” She added, “he’ll face no consequences bc [Minority Leader Kevin McCarthy (R-Calif.)] cheers him on with excuses.”

However, Gosar defended himself from the charges.

“I do not espouse violence towards anyone. I never have,” Gosar insisted on the House floor.

“The cartoon depicts the symbolic nature of a battle between lawful and unlawful policies and in no way intended to be a targeted attack against Representative Cortez or Mr. Biden,” Gosar said in a separate statement. “It is a symbolic cartoon. It is not real life. Congressman Gosar cannot fly. The hero of the cartoon goes after the monster, the policy monster of open borders.”

McCarthy said that he had called Gosar after hearing about the video, noting “I called him when I heard about the video, and he made a statement that he doesn’t support violence, and he took the video down.” McCarthy, satisfied by Gosar’s insistence that he meant no real-world harm, did not push for the congressman to be censured.

Republican leaders did not try to whip up support against the resolution, which was all but guaranteed to pass the Democratic House. However, leaders did recommend that members of their caucus vote against the motion.

However, Speaker of the House Nancy Pelosi (D-Calif.) was less forgiving of the cartoonish gag, which she argued was an example of “workplace harassment and violence against women.”

Pelosi said that Gosar “made threats, suggestions about harming a member of Congress.”

“That is an insult—not only endangerment of that member of Congress, but an insult to the institution of the House of Representatives,” Pelosi told reporters.

“We cannot have members joking about murdering each other, as well as threatening the President of the United States,” she added.

Pelosi also indicated that she believes that Gosar should face criminal proceedings. “I think threatening the lives of anyone, not just a member of Congress and certainly the president of the United States, should warrant law enforcement attention,” Pelosi said.

House Majority Leader Steny Hoyer (D-Md.) insisted that the move was not driven by partisan loyalties.

“If a Democrat does what Gosar did, I will sponsor the censure,” Hoyer said. “This is about a threat and a visual portrayal of a member killing another member. If a Democrat did that, they ought to get the same treatment.”

But McCarthy argued in a House floor speech that the censure was an “abuse of power.”

“Democrats are preparing once again to break another precedent of the United States House of Representatives,” McCarthy said ahead of the vote. “The speaker is burning down the House on her way out the door.”

The Democrats’ true intention in censuring Gosar, said McCarthy, is to “silence dissidence and stack the deck for their radical agenda.”

McCarthy noted Democrats’ unwillingness to censure their own Rep. Ilhan Omar (D-Minn.) after she went to Minneapolis during the summer 2020 riots to encourage rioters to “stay on the streets” and “show them we mean action.”

“This side of the aisle didn’t ask for [Omar] to lose her committee,” McCarthy said. “We simply asked for an apology.”

In an indication that Republicans may follow the precedent set by the censure motion, McCarthy said “What [Democrats] have started cannot be easily undone.”

Omar and others, McCarthy added, “Will need the approval of a majority to keep [their committee] positions in the future.”