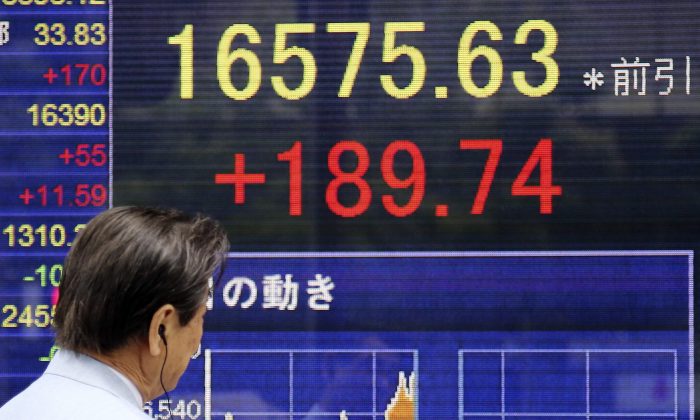 A man looks at an electronic stock board of a securities firm in Tokyo, on July 15, 2016. (AP Photo/Koji Sasahara)
Business & Economy

European Shares Drift Lower After Another Attack on France

LONDON—European stock markets drifted lower Friday after another deadly attack in France that killed at least 84 people in the Mediterranean city of Nice.

NICE ATTACK: The mood in markets was subdued by the latest attack in France, which saw a man driving a truck into crowds celebrating Bastille Day along the beachfront of Nice. Markets have largely held their own as they invariably have done over similar incidents in the recent past. No one has claimed responsibility for the rampage, which followed attacks in November in Paris that killed 130 and in January 2015 that killed 17.

ANALYST TAKE: “If the purpose of terrorism is intimidation then market indifference would seem the most appropriate way for them to respond in order to show solidarity with the victims,” said Simon Derrick, chief markets strategist at BNY Mellon. “Nevertheless, it is worth asking whether there may be a cumulative effect on investor sentiment over time from the continued terrorist assaults in western Europe, Turkey and Lebanon. We will continue to monitor this issue closely.”

CHINA DATA: The tragic news from Nice is overshadowing everything else, including a report showing that the Chinese economy, the world’s second-largest, expanded at a steady 6.7 percent pace in April-June, as recovering spending on construction by state-owned companies helped compensate for weak private sector demand.

US DATA: There’s a raft of U.S. economic data later that may impinge upon trading particularly on Wall Street. In addition to inflation numbers, investors have retail sales data and the Empire State survey of manufacturing activity around the New York region to assess.

ENERGY: Benchmark U.S. crude slipped 19 cents to $45.49 a barrel in electronic trading on the New York Mercantile Exchange, while Brent crude, a standard for international oil prices, fell 15 cents to $47.22 a barrel.