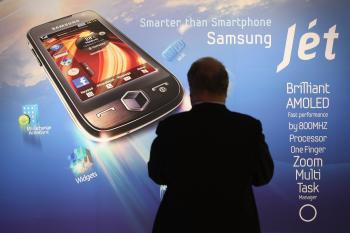 A visitor stops at a poster for Samsung's new Jet smartphone at the Samsung stand on opening day at the IFA technology trade fair on September 4, 2009 in Berlin, Germany. (Sean Gallup/Getty Images)
Business

In Europe, where most businesses and consumers are still reeling from the global recession, mobile phone makers are feeling the pinch.

The latest data from market research firm IDC found that second-quarter mobile phone shipments in Western Europe were down 6 percent from the same quarter in 2008. While the sales are a 14 percent improvement over the first quarter, full year results are expected to come in below expectations.

"The first six months of the year were very challenging to both vendors and operators in Western Europe. The market was hit hard by the financial crisis, and demand mobile for phones slumped as never experienced before," said Francisco Jeronimo, IDC’s European mobile devices research manager, in a statement.

The silver lining for mobile phone manufacturers is that higher-margin smartphone sales are up 25 percent for the quarter, while traditional handset sales declined 12 percent. Both manufacturers and mobile carriers prefer to sell smartphones as they can tack on extra services such as messaging, e-mail, and Web surfing.

North American smartphone makers Apple Inc. and Research In Motion Ltd. together only accounted for 6 percent of the Western European market as of the second quarter.

Mobile carriers have largely stood on the sidelines as popular mobile applications continue to increase in popularity. Apple Inc.’s iPhone pioneered the concept, working with third-party developers to introduce a slew of programs that use technologies and services such as GPS, 3G networks, social networking, and remote storage.

The service, unlike phone-specific applications from Apple, BlackBerry, and Android, will be accessible from multiple handsets, PCs, and Macs.

Vodafone launched the service to coincide with its new marketing tagline “Power to You,” and it is the first carrier to offer file/application/preferences synchronization across mobile phones and computers.