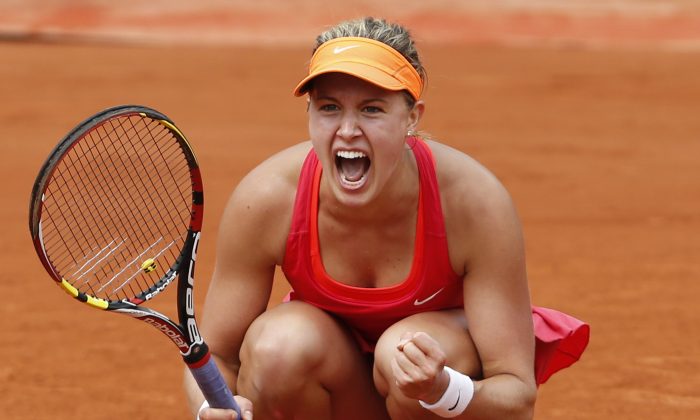 Eugenie Bouchard is the talk of Canada after making it into the French Open semifinals.

She’s the only North American to make it this far this year, and the only Canadian after Milos Raonic fell in the quarterfinals on the men’s side.

Bouchard was down in both the first and third sets before fighting back.

“That’s what I try to do on the court,” she said at a post-game press conference. “At the end of the day whether I win or lose I want to leave it all out there and try my best and battle.”

“I’m just proud of the way that I stayed in there,” she added.

Took a selfie after my match… Fabrice thinks I’m “known for my selfies”! #lol pic.twitter.com/dZIoqZt8LY

Good season guys. Chillin in Paris with my new hat. Thanks @CanadiensMTL 😉 pic.twitter.com/q96AccVXcX

Bouchard, 20, became the second Canadian ever to reach the semifinals of a Grand Slam at the Australian Open earlier this year, and the first in 30 years, according to CBC.

She also won the first WTA singles title of her career at the Nürnberger Versicherungscup, a French Open warm up tournament, earlier this year.

Bouchard started playing tennis at the age of five, and started playing professionally in 2005. She became Junior Wimbledon Champion in 2012 and broke into the top-100 of the WTA the next year after beating Samantha Stosur at the Family Circle Cup.

Bouchard faces Maria Sharapova in the semifinals on Thursday. In their two meetings so far–in Miami and at the French Open last year–Sharapova has handily won in two sets (6-2, 6-0; 6-2, 6-4).