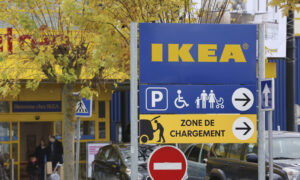 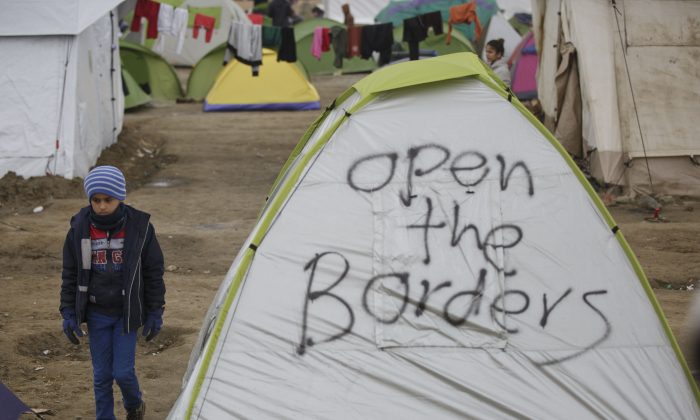 Migrant child walks past a tent at the northern Greek border station of Idomeni on March 7, 2016. (AP Photo/Visar Kryeziu)
Europe

EU Leaders to Press Turkey, Back Greece at Migrant Summit

BRUSSELS—European Union leaders on Monday sought to press Turkey to do more to stop migrants from entering Europe and to shore up support for Greece, where thousands of people are stranded.

The leaders are expected to acknowledge that the main Balkan migrant route is effectively closed, after Macedonia—backed by Austria, Croatia, Slovenia and Hungary—limited border crossings to a trickle. Hundreds of thousands of people fleeing conflict or poverty have used the route in recent months to try to reach preferred destinations like Germany or the countries of Scandinavia.

Ahead of the summit in Brussels, thousands of people waited by Greece’s border with Macedonia hoping desperately to be allowed to cross.

“Whatever it takes. We will go. We have nothing to go back to. Our homes are destroyed,” said Lasgeen Hassan, who, with the rest of his Kurdish Syrian family, wants to reunite with relatives in Germany.

“Rules are for all, and everybody has to implement our common decisions,” Prime Minister Alexis Tsipras told reporters. “If there are agreements that are not implemented there are not agreements at all.”

EU leaders agreed in September to share 160,000 refugees arriving in Greece and Italy over two years. As of March 3, fewer than 700 people had been relocated to other European countries.

In a draft statement prepared for the summit, seen by The Associated Press, the leaders said they will pursue “comprehensive, large scale and fast-track returns to Turkey of all irregular migrants not in need of international protection.”

Turkey is home to an estimated 2.75 million refugees, most from Syria, and rights groups say that many are living in tough conditions.

Davutoglu said he hopes the summit will mark a turning point in EU-Turkey ties. He said the meeting is as focused on Turkey’s future EU membership as on the refugee emergency.

“Turkey is ready to work with the EU, and Turkey is ready to be a member of the EU as well,” Davutoglu told reporters, expressing hope that the talks “will be a success story and a turning point in our relations.”

The EU is desperate to halt the flow of migrants crossing the Aegean Sea between Turkey and Greece. It has offered Turkey 3 billion euros ($3.3 billion) in refugee aid, fast-track EU membership and an easing of visa rules to win its support.

“We will need to bring relief to Turkey, and that means you have to be willing to take people in from Turkey” who will probably qualify for asylum, he said.

Human rights group Amnesty International hit out at the leaders for using Turkey as a buffer to stop migrants, calling the move “a dangerous and deliberate ploy to shirk their responsibilities to people fleeing war and persecution.”

“Europe has an absolute duty to protect refugees and must make the bold decision to fast-track significant, unconditional resettlement as a matter of urgency,” said the group’s deputy director for Europe and Central Asia, Gauri van Gulik.

In Athens, police patrolled a central city square to prevent migrants setting up camp after the site was cleared at the weekend.

Hundreds of people, mostly from Afghanistan, had been sleeping rough at Victoria Square after Austria and Balkans countries further north imposed border restrictions and closures.

Refugees and other migrants have continued to travel to Greece from Turkey despite the border closures, with 2,480 arriving Sunday, according to the United Nations refugee agency.

Some 34,000 migrants are currently stranded in Greece.