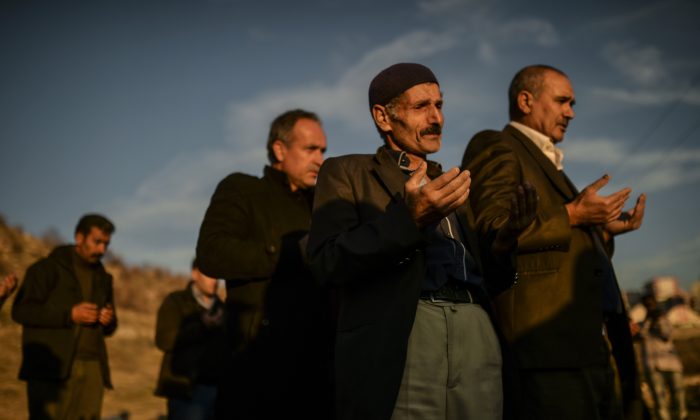 People offer prayers beside the grave of Mehmet Tekin, 38, who was killed at his home in Cizre. Turkey is waging an all-out offensive against the separatist PKK, with military operations backed by curfews aimed at flushing out rebels from several southeastern urban centres. (BULENT KILIC/AFP/Getty Images)
Europe

The European Union on Saturday condemned as “extremely worrying” Turkey’s arrest of academics who signed a petition criticising a military crackdown in the Kurdish-dominated southeast.

“The steps taken against the Turkish academics who signed a declaration regarding events in the southeast of Turkey are an extremely worrying development,” an EU spokesperson on foreign affairs said in a statement.

“They are no longer detained, but the procedures against them are ongoing.”

Turkish police on Friday, January 15th, detained at least 18 academics who signed a petition criticising a military crackdown in the southeast, triggering new alarm about freedom of expression in the country.

They were arrested in raids targeting 21 academics accused of disseminating “terrorist propaganda” by signing a petition denouncing military operations against Kurdish rebels.

Fifteen academics and lecturers from the University of Kocaeli, near Istanbul, were initially detained, with another three academics from Uludag University in western Bursa province later held in their offices, Turkey’s Dogan news agency said.

The academics were questioned for a day before being released, Dogan reported late Friday.

“While reaffirming our strongest condemnation of all forms of terrorist attacks, including by the PKK … we restate that the fight against terrorism must fully respect obligations under international law, including human rights and humanitarian law,” the EU spokesperson said.

“Freedom of expression must be upheld, in line with the Copenhagen political criteria; an intimidating climate goes against this.

Turkish prosecutors on Thursday launched a vast investigation into over 1,200 academics from 90 Turkish universities for engaging in “terrorist propaganda” and “inciting hatred and enmity” by signing the petition.
Entitled “We won’t be a party to this crime”, the petition urged Ankara to halt “its deliberate massacres and deportation of Kurdish and other peoples in the region”, angering President Recep Tayyip Erdogan.

In a rare rebuke to Washington’s NATO ally, the US ambassador to Turkey has also expressed alarm over the investigations, with Western concern on freedom of expression already riding high owing to the detention since November 26th of two prominent opposition journalists.

Turkey is waging an all-out offensive against the separatist Kurdistan Workers’ Party (PKK), with military operations backed by curfews aimed at flushing out rebels from several southeastern urban centres.

But Kurdish activists say dozens of civilians have died as a result of excessive force and the operations have become the subject of huge controversy in Turkish society.