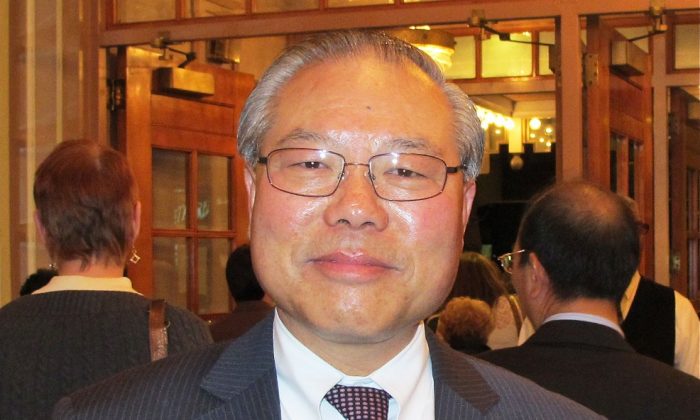 PHILADELPHIA—Shen Yun Performing Arts graced the stage at Philadelphia’s Merriam Theater on Tuesday night, May 8, pleasing the audience with a visually compelling display of one of the most ancient cultures in the world.

Out of all the performances Psychiatrist and UCLA Professor Dr. Tai Yoo had seen, including many in Beijing and Hangzhou, “this is the outstanding one,” he said.

“A lot of good dancing and technological synchronizing with the screen,” he proclaimed. “This is something new.”

Shen Yun, based in New York, has three equally large companies touring the world, “reviving the 5,000 year-old, divinely-inspired Chinese culture,” according to the Shen Yun website.

“Sophisticated dance techniques, an orchestra joining instruments East and West, beautiful costumes, and a stunning back drop—this is Shen Yun at first glance,” the website states. “But digging deeper, one discovers a sea of traditional Chinese culture. Mortals and divine beings merge on stage as one. Principles such as benevolence and justice, propriety and wisdom, respect for the heavens, and divine retribution, all come to life, washing over the audience. Originating from Confucianism, Buddhism, and Taoism, these ideals are the essence of traditional Chinese culture.”

Dr. Yoo’s schooling and professional training has taken him from Korea to California; and from Michigan to the New York metro area. He participates in numerous professional societies, such as the American Medical Association, and chairs and directs the UCLA-Kern Psychiatry Residency Program.

On Tuesday, Dr. Yoo enjoyed both the performance and “all the historical dancing from all parts of China,” he said, referring to the vast body of work in a Shen Yun performance. The dancers are trained in one of the most comprehensive dance systems in the world—classical Chinese dance—and also depict some of the 54 “officially recognized ethnicities” in China, according to Shen Yun’s website.

Yet despite the passion from the artists of Shen Yun, the company is not currently allowed to travel to China, depictions of traditional culture and the virtues Shen Yun seeks to show the world aspects of China the Chinese Communist Party has worked hard to destroy.

“This kind of movement .. with a lot of shows will help change mainland China,” he said. “I think the whole Chinese people will work out and enjoy the change.”