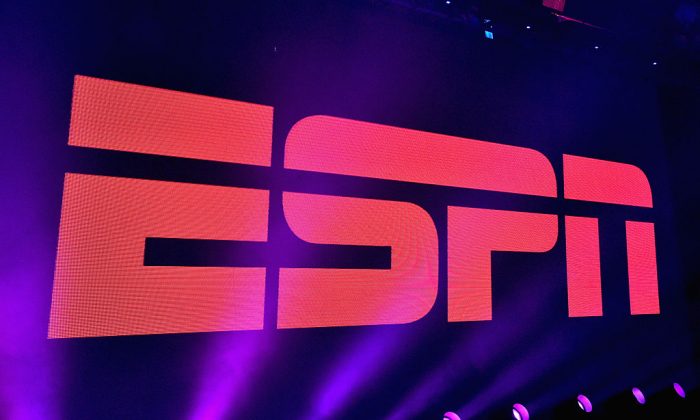 A view of the logo during ESPN The Party on in San Francisco on Feb. 5, 2016. (Mike Windle/Getty Images for ESPN)
US

ESPN broadcasters participated in an on-air moment of silence on March 18 in opposition to Florida’s Parental Rights in Education legislation, which in part calls for a ban on the teaching of “sexual orientation and gender identity” to children in kindergarten through third grade.

“Normally at this time, we would take a look back at the first half, but there are things bigger than basketball that need to be addressed at this time,” ESPN announcer Courtney Lyle said at the start of halftime of the South Carolina versus Howard University tournament game.

“Our friends, our family, our coworkers, the players, and coaches in this community are hurting right now.”

Lyle and co-announcer Carolyn Peck both indicated they were responding to a request by their “LGBTQIA+ teammates at Disney” for a show of solidarity and support in opposing Florida HB1557 and similar legislation “across the United States.”

Workers at Disney’s theme park in Florida have reportedly been staging daily walkouts in protest of the proposal.

While opponents of the legislation have dubbed it the “Don’t Say Gay Bill,” there is actually no reference to homosexuality in the legislation. The seven-page bill mostly proposes notification requirements to parents.

HB 1557, which has been amended 37 times since it was introduced in January, specifically proposes, “Classroom instruction by school personnel or third parties on sexual orientation or gender identity may not occur in kindergarten through grade 3, or in a manner that is not age-appropriate or developmentally appropriate for students in accordance with state standards.”

The bulk of the measure calls for additions to three existing Florida statutes under the state’s Early Learning education laws and 1014.04, a section of Florida’s relatively new Parental Bill of Rights passed last year. The other two statutes are 1001.42, “powers and duties of district school boards,” and 1002.20, “K-12 Student and Parental Rights.”

The proposed changes would expressly prohibit any school from restricting parents’ access to their children’s education and health records and from withholding any notification to parents about their children’s mental, emotional, or physical health or well-being. The school also would be required to notify parents about any school services provided to children relative to their physical or mental health.

It would allow schools to withhold information about their child “if a reasonably prudent person would believe that disclosure would result in abuse, abandonment, or neglect.”

The measure also requires schools to provide copies of any student well-being and/or health screening questionnaire and obtain permission from parents to administer it to their children.

The ESPN protest followed less than a week after a California mother spoke publicly for the first time about her daughter’s suicide after the child’s school recommended the mother lose custody when she tried to interfere with what she said was the school’s efforts to secretly transition her daughter to a boy.

Abigail Martinez, during a panel discussion last week held by The Heritage Foundation, talked about how her daughter’s school worked with child protection services to strip her of custody so they could move forward with her gender transition.

“It breaks my heart what LGBTQ is capable of doing behind our backs,” said Martinez, who described her daughter Yaeli as her “beautiful girly girl who used to love to dress up as a princess.”

In January, two Florida parents filed a lawsuit against their 12-year-old daughter’s Clay County school after she tried to commit suicide following a similar secret transitioning process they discovered the school was conducting.

January Littlejohn, of Tallahassee, who also spoke at The Heritage Foundation’s panel discussion, described her shock when she learned that the school was transitioning her 13-year-old daughter to a boy.

Littlejohn, who also happens to be a mental health counselor, said she learned from her daughter that the school asked her which sex she would prefer to room with on overnight school field trips, which restroom she would prefer to use at school, and which name she preferred the school to use when speaking to her parents.