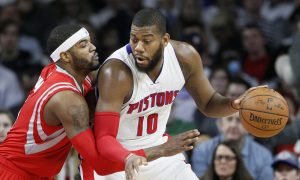 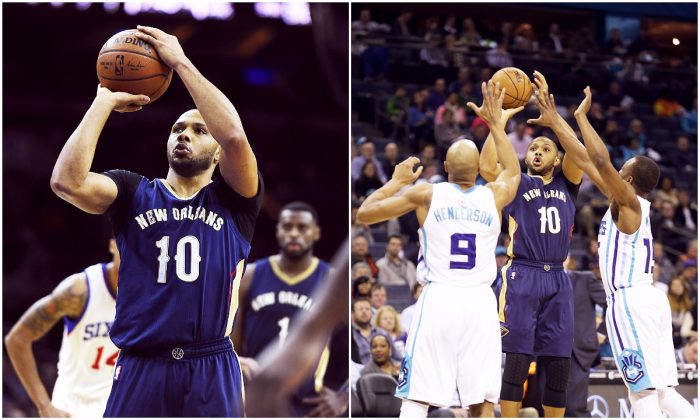 Eric Gordon, by many accounts, is having a terrific season. The starting shooting guard has played a key part in the New Orleans Pelicans being in the playoff hunt so late in the season, despite the team having to play without five rotation players at times.

In his eighth season in the league, Gordon has focused more on being a sharpshooter, and his extra practice has paid dividends–he’s second in the NBA in 3-point percentage at 46.1 percent, behind only vaunted marksman Kyle Korver.

Gordon told Epoch Times that he identified a need on the team in the offseason and strove to fill it, practicing his already-solid outside shot even more than usual.

“I went into the season wanting to do something different that our team hasn’t been doing, and that’s making a lot of three-point shots,” he said. “Because we have a lot of guys that can get to the rim, get to the basket, but we don’t have very many that can make a lot of threes.”

Gordon still attacks the basket and creates for teammates to provide the Pelicans with a balanced game–especially with the injuries to Jrue Holiday and Tyreke Evans. He’s averaging about five drives a game, which is just slightly down from last season. He’s also dishing out four assists a game. But he’s taking fewer 2-pointers than ever before as he focuses on his primary strength of long range shooting.

“I’ve always been a pretty good shooter,” he said. “Thing is, I’ve liked to play a well-balanced game, where I do a little bit of both [driving and shooting] but this year I’ve shot more threes than I normally have and definitely been hitting them more.”

Gordon is particularly good at shooting after receiving a pass, or catch-and-shoot opportunities, from both behind and inside the 3-point line. He has a 70.6 Effective Field Goal Percentage, or a percentage adjusted for 3-pointers being more valuable than 2-pointers, according to the NBA’s SportVU tracking cameras. That percentage is third in the league among players above a minimum number of points, behind only Korver and Gordon’s teammate Luke Babbitt. Almost every 3-pointer that Gordon makes–93 out of every 100–are assisted by one of his teammates.

Gordon said that the resiliency the team has displayed–having to play at times without key rotation players Anthony Davis, Ryan Anderson, Holiday, Evans, and Gordon himself–proves that the Pelicans are “a pretty talented team” with a stellar coach who has been putting his players in position to win.

The team isn’t surprised they’re in the thick of the playoff race, poised to keep Kevin Durant and Russell Westbrook out of the playoffs in one of the more surprising developments of the season. The Pelicans moved into eighth on Wednesday after Oklahoma City lost to the Clippers.

“We’ve been around this hunt throughout the whole season, it’s been a lot of back and forth between us and them,” Gordon said. “It’s all about now who can stay the healthiest, and definitely see who can win games consistently.”

The 26-year-old said that he and his teammates aren’t thinking ahead about a probable matchup with the Warriors if they do make the postseason.

“We just got to make it first, then we’ll see what goes on from there,” he said. “It’ll be more of a relief once we finally make it.”

Gordon is in an interesting position in terms of his contract, having a $15.5 million player option for next season.

The shooting guard said that the recent update on the cap–how it won’t be “smoothed,” and instead jump by tens of millions after next season–presents “good timing,” seeming to hint that he’d opt in.

But he would not answer definitively. “It’s all about finishing up this season and see what happens,” he said.

So he hasn’t decided yet? “Oh, no,” he said. “It’s been good here, we’ve been getting better each year, and this team can only go uphill, I would say.”

So he’s leaning toward opting in? “It’s either/or,” he said. “I mean, this year’s been a great year, been an exciting year. I know what the future holds here.”

One of the biggest factors in Gordon’s decision may very well be the chance to keep playing with Anthony Davis, one of the preeminent players in basketball.

Davis, who just turned 22, has ramped up his game even more this season, pouring in almost 25 points a game along with 10 rebounds and 7 boards.

“Well it’s definitely good,” Gordon said, laughing, “because he draws attention, and a big time player. It’s fun to play with a guy who can knock down jump shots, and catch lobs, and of course he’s an exciting dude to watch all the time.”

Gordon has played with Davis and Anderson for nearly three seasons now, while Evans and Holiday joined the team about two seasons ago. The core group has struggled to stay healthy but have pretty good chemistry, and the team has avoided spats that have threatened to derail the Thunder and Suns at different points this season. “Everybody’s been pretty much staying together,” noted Gordon.

Great training sessions in #Germany during break… Back at it Friday against @orlandomagic. Every game gonna be crucial during this playoff push!

Gordon has unfortunately had a tough time staying healthy throughout his career, and missed 20 games earlier this season due to suffering a torn labrum after his left shoulder was partially dislocated.

In his efforts to prevent future injuries, he traveled to Germany during the All-Star break to get some treatments. He’s been going there for about two years now.

“It was good, over there they really just get back to basics with things,” he said.

“They did some helpful things over there. They give you treatments, and then they also give you exercises that you should do that will re-align your body all back together.

“They look at your overall body, they don’t just look at the problem, like how we do in America where if it’s a knee problem we only focus on the knee, whereas when you’re over there you’re focused on everything else besides the injury, or just focus on other things that are not the main problem.”