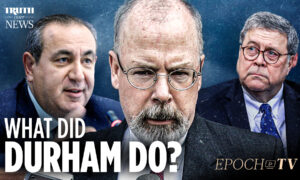 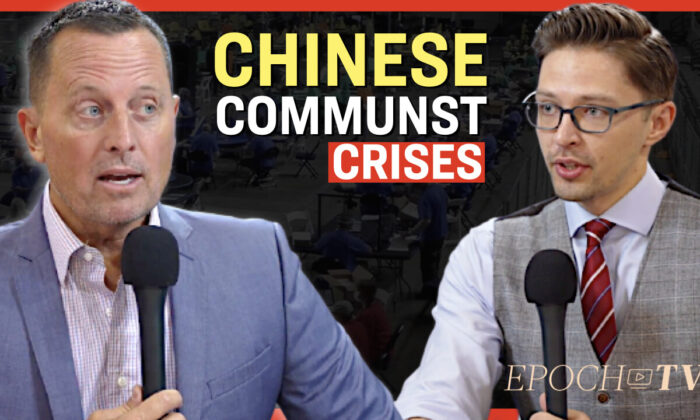 Epoch TV Review: There’s a Crisis of Confidence Between the American People and Government Agencies: Why It Is Happening and How It Can Be Fixed

In an episode of “Facts Matter,” host Roman Balmakov sits down with former acting director of intelligence under President Trump, Richard Grenell, to discuss the source of the crisis of confidence that has developed between the American people and government agencies.

First, they talk about the Durham investigation, which is largely focused on the activities of the FBI during the Trump-Russia probe, and the lack of accountability the American public is witnessing taking place. Grenell says there needs to be a transparent look at the truth so that the American people can understand what happened. He says even though the FBI knew that the Steele dossier (an opposition report alleging collusion between Trump and Russia during the 2016 presidential campaign) was part of a DNC Hillary Clinton opposition research dump that turned out to be nearly completely untrue, the FBI did not share that important information with the courts. “It is unacceptable to have the weaponization of government agencies against political opponents and that’s exactly what happened,” Grenell says.

Grenell says that it appears there have been no leaks about the Durham probe, which is a good thing. However, now the investigation appears to be lingering, and delayed justice sometimes means no justice. The American people need to be able to demand that the probe be concluded, or else it feeds the idea that there is no justice in our system for certain people.

In the episode, they discuss the reality of the growing distrust of the American people in government agencies. Grenell notes that this is a bad thing because it will result in voters telling their representatives to approve less funding for these agencies, which means the intelligence community will be able to do less work. He says these agencies need to come clean about what they know about the Russian probe, which may mean showing that they made mistakes. Although full transparency is not easy, it is necessary in order to fix the crisis of confidence in our nation.

Next, the episode breaks down the recent leaking of Tucker Carlson’s name after the reporter tried to get an interview with Russian President Vladimir Putin. Grenell explains the process that is supposed to happen when unmasking a reporter’s name and what went very wrong in the intelligence community. Grenell explains that in an effort to get an interview with Putin, Carlson emailed, called, and spoke with individuals who may know Putin and could help him get that interview, which is a normal and legitimate thing for journalists to do. As part of the intelligence process, Tucker Carlson’s correspondence was gathered. When this happens, the intelligence community is legally required to identify individuals caught in the intelligence only as journalists or, if a Congress member, simply as a member of congress. They cannot be identified by name or any other specifics.

During his time working for the Trump administration, Grenell says that some members of the intelligence community were beginning to identify people beyond what they are legally allowed to do. Grenell addressed the issue and reminded his team in a memo that they have to protect the identity of these people. However, since then, Tucker Carlson’s name has been leaked. In order for that to happen, someone in the intelligence community had to have requested the name of the journalist to be unmasked, which should only happen if it is deemed important to know who that individual is.

Grenell says that there is a record kept of everyone who requests unmasked names so that the intelligence community can keep track of every person who is aware of these names. When someone unmasked Carlson’s name, they shared that information with someone else, which Grenell notes is not appropriate as that information cannot be shared with anyone who has not requested the information to be unmasked and put their own name on the unmasking request list.

Although Grenell believes that the majority of intelligence officers love their country and do not leak information, sometimes, it can also be politicians who are at fault. He gives examples of intelligence officers he’s worked with who were unwilling to brief members of congress because they knew the politicians would politicize what they were going to say and leak it to the media.

To solve this problem, his team created a system where they would write down the briefing and hand it to members of congress in an unclassified version. Members of congress were furious at this, because this system would not allow them to leak information or pick and choose which words to change and spin on mainstream media. Grenell notes that he has watched politicians sit with a lawyer and say under oath that they did not see Russian collusion, only to go to the mainstream media and say the exact opposite.

Lastly, Grenell gives insight into foreign interference that could potentially take place in upcoming elections. First, he says that what Russia has always done is known as propaganda. Although the media has scared people into thinking that Russia is capable of changing votes and affecting the election, he does not believe this is happening. Grenell explains that the main thing Russia does is interfere in U.S. election discussions, largely on social media. Spreading misinformation and perpetuating propaganda is a growing problem with Russia. However, there is no evidence that Russia has changed any vote in the United States, he says.

Russia may be a problem, but according to Grenell, China is the one seeking a U.S. crisis. He says that China is the country responsible for sending diplomats to American communities and extending its influence in city council campaigns, mayor and governor races, and elections for congressional office. In response to this security crisis, the Trump administration shut down the Chinese consulate in Houston Texas, and Grenell says the Biden Administration should shut down the Chinese consulate in San Francisco, but instead is being too nice to China in an effort to avoid any conflict with the country.

Listen to the full episode to hear more behind the scenes information on these important issues.

“Facts Matter” premiers every Saturday at 6 p.m.—exclusive on EpochTV.