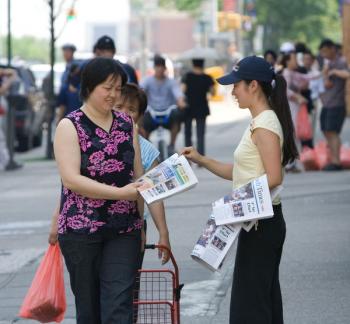 MELBOURNE—An Australian man was attacked and abused by a Chinese youth while giving out The Epoch Times newspaper in Melbourne’s inner city on Thursday August 7, but members of the general public drove the youth away.

In a scene reminiscent of attacks on Epoch Times distributors in New York recently, Dean Flyn was approached by a young Chinese man, shouting loudly.

“I thought he was a tourist at first,” Mr Flyn said, “He was yelling really loudly.”

The man tried to wrestle the papers from Mr Flyn as he was handing it out to people but members of the public began to yell at the man to stop.

The Chinese man then tried to grab the paper from an elderly lady as she was taking it from Mr Flyn, but the lady pulled the paper away, rolled it up and started to hit him on the head with it. The man then ran away.

He said the man was yelling “how much are they paying you,” and “ this paper is not true”.

Epoch Times Australia Editor-in-Chief Shar Adams said the Chinese Communist Party controls all information in and out of the country.

“So Chinese people don’t have access to the truth. The regime is now trying to do the same in other countries but it wont stop us being a voice for Chinese people and reporting what is really going on there.”

Mr Flyn said he had been distributing The Epoch Times outside Melbourne’s Central railway station for three years and had never experienced anything like it.

“I have regulars who take it every week,” he said, “People love the paper.”

“The man was yelling so loudly. I was quite shaken.”

Many were arrested and the Falun Dafa Information Centre also obtained a recording of the Chinese Consul General in New York admitting he was encouraging the attacks.

A number of the alleged attackers were also overheard describing how much money they were being paid to cause trouble in the area.

Mr Flyn said he was unsure whether his attacker was acting alone or not, but said he appeared to be with a woman of similar age who had remained some distance away, watching the incident.

Next week, Mr Flyn said he would recruit a friend to help him on his delivery run so that they could take photos and record evidence of any attacks for police.

Simon Vereshaka, spokesperson for the Victorian Falun Dafa Association, said he had been called about the incident in Melbourne and had alerted the police.

While there have been a number of harassment incidences against Chinese Falun Gong practitioners in Australia, this was first time a Westerner had been attacked and abused while going about their business in the street he said.

“It is shocking that a Westerner has been harassed,” Mr Vereshaka told The Epoch Times. He said he had advised the police of the incident.

“They said they would follow up on any reports.”