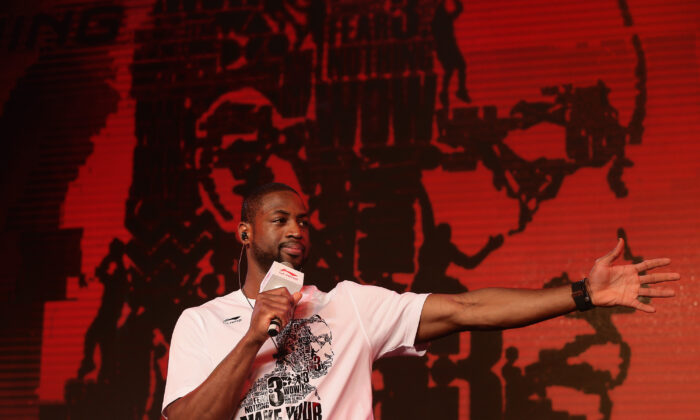 “If you don’t stand for something, you’ll fall for anything,” wrote retired NBA player Dwyane Wade on Twitter in June 2020.

The tweet, coming out amid mass protests over the death of George Floyd, pictured the basketball player holding a pair of black shoes with the slogan painted over in capital letters: “enough is enough.”

The account that posted the message was Wade’s sneaker brand “Way of Wade,” which is owned by Li-Ning, a Chinese sports brand that has come under scrutiny for endorsing Beijing’s handling of Muslim minorities in Xinjiang, where the regime has waged a repressive campaign against Uyghurs that the United States has described as a genocide.

Aside from Wade, at least 17 players with the NBA currently hold endorsement deals with one of four major Chinese sports apparel companies that have murky ties to forced labor in the region, according to ESPN.

When the United States and allies collectively imposed sanctions over Xinjiang last March, Li-Ning and the other sports apparel firms—Anta, Peak, and 361 Degrees—fiercely pushed back, reiterating their support for Xinjiang cotton, a commodity that researchers say is likely tainted with Uyghur forced labor. The region supplies about 20 percent of the world’s cotton.

Concerns about Beijing’s treatment of Uyghurs prompted a U.S. decision to stage a diplomatic boycott of the Beijing Winter Olympics. In December, the United States also became the first country to pass a law banning all imports from the region over forced labor concerns.

For the Chinese brands, the show of loyalty nonetheless produced tangible results. Li-Ning’s shares surged after some nationalist fans found that the brand had for some time been explicitly highlighting the Xinjiang cotton origin on its product labels.

In 2012, Wade signed a 10-year contract to represent Li-Ning that was to bring him $10 million a year, producing a sub-brand “Way of Wade.” In 2018, he converted the agreement to a lifetime deal before his final NBA season. The player hasn’t made public statements on China’s human rights concerns.

Since the mid-2000s, more than 50 NBA players have become endorsers of Chinese brands to cash in on the sport’s huge popularity in China, according to ESPN. The latest to join them was Washington Wizards guard Spencer Dinwiddie, who in January signed a multi-year shoe deal to be the ambassador for 361 Degrees.

The NBA and its players have faced criticism for employing double standards by championing social justice causes domestically while remaining silent on issues relating to China.

“Far too many members of America’s corporate and social elite are willing to repeat woke talking points while making money off of others’ enslavement. This is a disgusting double standard,” Sen. Marco Rubio (R-Fla.), who sponsored the recently enacted Uyghur Forced Labor Prevention Act, told The Epoch Times in an email.

Rubio hopes the law “will help put an end to this hypocrisy and force those doing business in our nation to remove any trace of Uyghur slave labor from their supply chains.”

Sen. James Lankford (R-Okla.), who had called for the 2022 Winter Olympics to be relocated from Beijing, urged athletes to “stop any endorsement with companies who support or remain silent to the egregious human rights abuses by the Chinese Communist Party towards ethnic and religious groups such as the Uyghurs.”

“Many look to these athletes as role models—it’s time for them to stand up for what is right,” he told The Epoch Times. “They have the power and platform to speak out—no endorsement or amount of money is worth keeping silent.”

Yet silence is the path chosen by most in the NBA, according to Enes Kanter Freedom, the former Boston Celtics center who has taken a strong stance against the Chinese Communist Party (CCP), lambasting the regime for its abuses in Tibet, Xinjiang, and its forced organ harvesting of prisoners of conscience. Freedom said his colleagues were “too scared to say anything” on China due to their commercial interests there.

“They know what’s going on, they know all the abuses done by CCP, but just because … they had these big endorsement deals or they have a lot of jersey sales or shoe sales in China, they are telling me they have to remain silent but they are supportive of me and praying for me,” he told a think tank forum in late January.

In 2019, several NBA stars criticized then-Houston Rockets General Manager Daryl Morey after he posted a tweet in support of Hong Kong pro-democracy protesters. While the tweet was soon deleted, it drew the wrath of Beijing, leading to all Chinese sponsors walking out of partnership deals with the league.

The league quickly went into damage control and issued an apology, saying it was “regrettable” to see the fans in China offended. While its English statement said “the values of the league support individuals’ educating themselves and sharing their views on matters important to them,” it also gave a more placating version on Chinese social media, saying the league was “extremely disappointed” by the tweet, which “seriously hurt the feelings of Chinese sports fans.”

However, the league’s commissioner, Adam Silver, insisted that there were no discrepancies in the two statements and pointed to the English one as the official version.

Silver also recently defended the league and its players, telling ESPN that their “track record of leadership in social justice speaks for itself,” which the NBA cited in a response to The Epoch Times.

“I don’t believe it’s hypocritical that the league and players focus their attention on issues that are closest to home and impact our own communities,” Silver said in the statement, adding that the players’ partnership choices aren’t subject to NBA approval.

Agents for Wade and Dinwiddie didn’t respond to a request by The Epoch Times for comment about their endorsements.

While he said he cares about climate change and Black Lives Matter, the issue about Uyghurs—whom he described as “a segment of a class of people in another country”—is “below my line,” he said during a podcast. The unexpected outpouring of anger, though, forced him to recant the statement hours later.

“I think there’s an epidemic of sellouts,” former NBA player Royce White told The Epoch Times. “The corporatism and materialism of the West has rubbed off on its athletes, and many of them see economic opportunity as independent from social responsibility. It’s wrong, it’s corrupt, and it’s dangerous.”

Freedom is currently without a team after being released by the Houston Rockets last month following a trade with the Boston Celtics. He believes his activism against the CCP may have cost him his career.

“To be honest, it is a lonely road—I’m talking about in a sports world,” he said on Feb. 17 at an awards ceremony in Washington to recognize his advocacy.

“You can talk about all the social justice, all the injustices happening all around the world. But when it comes to China, you cannot speak up. If you do, then you’d have to face the consequences,” he said. He also said he was subject to a two-week media ban following the Hong Kong tweet storm in 2019.

“We continue to support Enes Kanter Freedom expressing his views on matters that are important to him, as we do for all members of the NBA family,” league spokesman Mike Bass was quoted as saying.

Despite his effective ouster from the NBA, Freedom nonetheless added that he has “no regrets.”

After learning about the abuses, “If I didn’t speak up about all these issues that are happening over there, I wouldn’t be able to go to sleep, you know?”

The article has been updated with a response from the NBA.