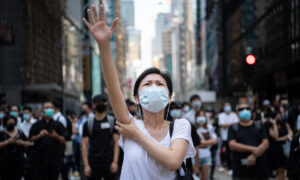 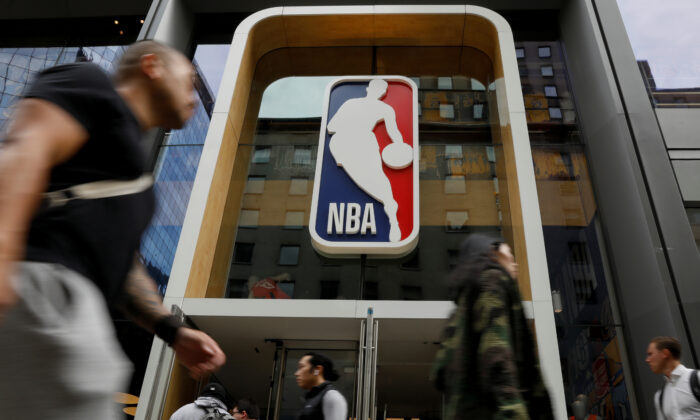 The NBA logo is displayed as people pass by the NBA Store in New York, N.Y., on Oct. 7, 2019. (Brendan McDermid/Reuters)
US News

“Fight for freedom. Stand with Hong Kong,” read the caption of the since-deleted tweet by Morey, originally posted on Oct. 4. The phrase has become a popular slogan in the embattled city of Hong Kong, where protesters stage almost-daily demonstrations against Beijing’s creeping encroachment.

Houston Rockets owner Tilman Fertitta soon reproached Morey on Twitter, saying that Morey’s views did not speak for the organization.

NBA’s chief communication officer Mike Bass also issued an official statement on Oct. 6 apologizing for the “regrettable” tweet that “deeply offended” Chinese fans. The Chinese statement posted onto the popular Chinese microblogging site Weibo was worded more apologetically: “We are extremely disappointed for the … inappropriate remarks. He has, without a doubt, seriously hurt the feelings of Chinese sports fans.”

Morey posted two tweets on Oct. 6 to stress that he did not intend to offend anyone and “was merely voicing one thought, based on one interpretation, of one complicated event.”

While speaking in Tokyo on Oct. 7, Houston Rockets’ star player James Harden also apologized for Morey’s tweet. The team was in Japan for a series of games. “We apologize. You know, we love China, we love playing there,” he said.

While NBA officials scrambled to minimize the tweet’s impact, the news sparked an immediate backlash in China.

The Chinese consulate in Houston said it was “deeply shocked by the erroneous comments” and demanded immediate action to “correct the error.”

The Chinese Basketball Association, chaired by Yao Ming, a former Houston Rockets basketball star himself, was the first to cut business ties with the NBA team on Oct. 6, saying it was “suspending” cooperation with the team.

On the same day, NBA’s exclusive online sports channel in China, Tencent Sports, announced that it would temporarily halt all broadcasting and reporting related to the Houston Rockets. The Tencent streaming deal is worth $1.5 billion over the next five years, according to The Associated Press.

The Shanghai-based sports news and commentary platform Hupu deleted all content that had reported about Morey in the past.

The hawkish Chinese state-run media Global Times lambasted Morey in an Oct. 7 editorial for his “impulsive words” that “invited trouble on himself.”

Brooklyn Nets’ new owner, Joe Tsai, also weighed in on the issue—by siding with the Chinese regime. In a late Oct. 6 post on Facebook, Tsai, who also co-founded the Chinese e-commerce giant Alibaba Group, labeled the ongoing Hong Kong protests a “separatist movement,” a common narrative disseminated in Chinese state media outlets. Many protesters have said they do not seek independence, but instead wish for the Chinese regime to respect Hong Kong’s autonomy.

“I am sure he’s a fine NBA general manager, and I will take at face value his subsequent apology that he was not as well informed as he should have been,” Tsai wrote. “But the hurt that this incident has caused will take a long time to repair.”

U.S. and UK officials blasted the NBA for prioritizing its economic interests in China.

“As a lifelong Houston Rockets fan, I was proud to see [Daryl Morey] call out the Chinese Communist Party’s repressive treatment of protestors in Hong Kong,” Sen. Ted Cruz (R-Texas) said on Oct. 6. “Now, in pursuit of big [dollars], the NBA is shamefully retreating.”

Sen. Rick Scott (R-Fla.), who recently returned from a trip to Hong Kong and criticized the Hong Kong government for acting as a “pawn” for the Chinese regime, said it was “shameful” to see the NBA “kowtowing to Beijing to protect their bottom line.”

“It’s clear that the NBA is more interested in money than human rights,” he wrote on Twitter.

Scott also released a statement on Oct. 7 requesting a meeting with the NBA commissioner “to discuss the NBA’s involvement in Communist China.”

“Men and women are risking their lives to fight for the same freedom we take advantage of in this country,” he said. “We must all put human rights above profit. And that means standing with Hong Kong.”

Sen. Chuck Schumer (D-N.Y.) similarly called the silencing of Morey “unacceptable”: “No one should implement a gag rule on Americans speaking out for freedom,” he said.

Sen. Josh Hawley (R-Mo.) sent a letter to 30 NBA team owners on Oct. 7 calling on the organization to “reverse course” and cancel all exhibition games in China.

“Remember that some things are more important than money. Remember your responsibility … And for an American organization to help the most brutal of regimes silence dissent in pursuit of profit is appalling,” he wrote in the statement.