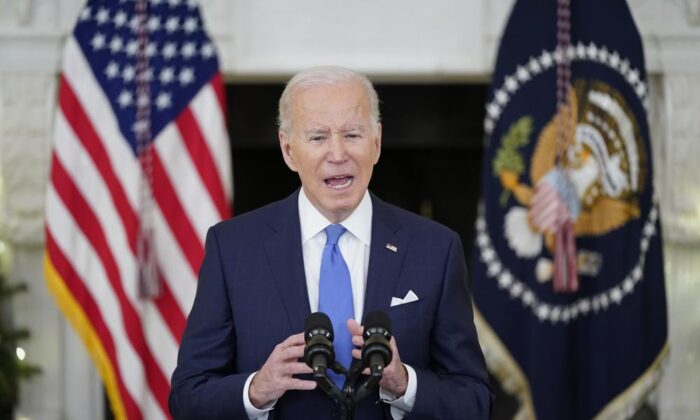 The bill represents another step in U.S. pushback against Beijing’s treatment of China’s Uyghur Muslim population. The Biden administration formally condemned China’s abuse of the Uyghurs as genocide in a report released in March.

“We believe the private sector and the international community should oppose the PRC’s weaponizing of its markets to stifle support for human rights,” said White House press secretary Jen Psaki at Thursday’s press briefing. “We also think that American companies should never feel the need to apologize for standing up for fundamental human rights or opposing repression.”

“We call on all industries to ensure that they are not sourcing products that involve forced labor, including forced labor from Xinjiang,” she added.

The bill, sponsored by Rep. James McGovern (D-Mass.), places responsibility on the U.S. Customs and Border Protection (CBP) to determine if goods from Xinjiang are manufactured by forced labor. It also assumes goods produced in the Xinjiang region where China has established Uyghur work camps are made with forced labor unless proven otherwise.

CBP estimates about $9 billion of cotton products and $10 million of tomato products were imported from China in the past year.

In its final days in January, the Trump administration announced a ban on all Xinjiang cotton and tomato products.

“This is a strong, bipartisan bill with a simple purpose: to stop the government of China from exploiting the Uyghur people,” said McGovern during floor remarks Dec. 8.

The measure also states that the president shall periodically report to Congress a list of foreign entities facilitating the forced labor of Muslim minority groups in Xinjiang and impose property-blocking sanctions on those entities.

The bill signing comes weeks after the White House announced a diplomatic boycott on the 2022 Winter Olympics in Beijing.

Biden last spoke with China’s President Xi Jinping in a virtual meeting Nov. 15 during which Biden raised concerns about China’s human rights record, according to the White House.