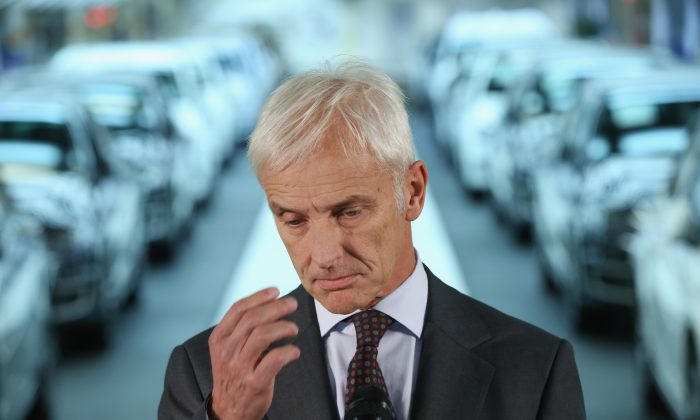 The EPA has found an additional batch of Volkswagen vehicles that appears to have emission standard cheating devices, handing the automaker a second notice of violation of the Clean Air Act. The first notice, issued in September, charged the company with modifying its diesel car engines with “defeat devices” so that they switch to a different emission standard only when being tested by federal regulators.

Volkswagen has admitted to the charges, and last month announced that it would recall 8.5 million of its 11 million diesel cars worldwide, with implementation beginning in January, but has denied that the mistake was a corporate one. Michael Horn, the CEO of VW’s American division, said in testimony before the House of Representatives Energy and Commerce Committee that isolated engineers were responsible for cheating.

The EPA’s latest accusation concerns a much smaller number of vehicles—10,000—with 3.0-liter engine that emitted nitrogen oxide (NOx) at up to 9 times the EPA’s standards, including the 2014 VW Touareg, 2015 Porsche Cayenne, and 2016 Audi A6 Quattro, but the number is expected to be much higher in Europe, where diesel cars are more popular than in the Untied States. The first notice concerned cars with 2.0 liter diesel engines that emitted NOx at 10 to 40 times the EPA’s standards.

“VW has once again failed its obligation to comply with the law that protects clean air for all Americans,” said Cynthia Giles, an administrate at the EPA’s compliance office, said in the statement.

In the wake of the scandal, Volkswagen’s CEO Martin Winterkorn was replaced by the former head of its Porsche division Matthias Müller, and its stock is still a fourth below what it was before news broke of the first EPA notice.

The Volkswagen scandal has evolved into an industrywide search for emission fraud, and on Sept. 25 the California Air Resources Board told all auto manufacturers that it would been checking cars for defeat devices.

“[The] EPA will continue to conduct a rigorous investigation that includes testing more vehicles until all of the facts are out in the open,” Richard Corey, executive officer of the California Air Resources Board, said in the statement.

The total financial fallout of the scandal could reach $87 billion, according to Credit Suisse, although Volkswagen disputes the figure. The company initially set aside $7.3 billion for problems related to emission cheating, and could face fines in the tens of billions in court.