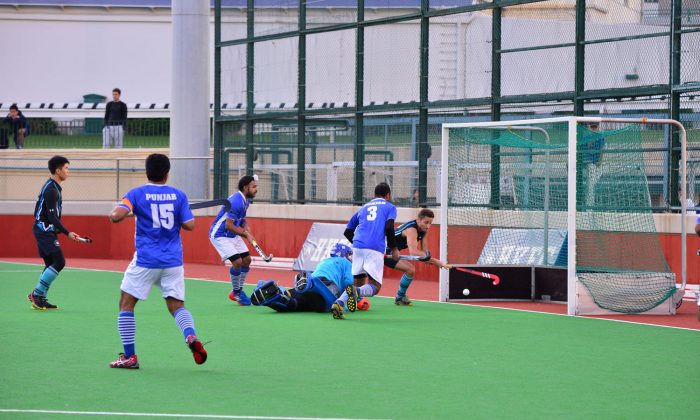 Tied up ... After an initial cross from Punjab’s Mohammad Nadeen was intercepted by HKFC-A Goalie Vincent Cheung, it fell into the path of Punjab-A’s Barkat Singh, who pushed the ball past the keeper and towards the goal. Club’s James Piachard hooked the ball away, but it was adjudged over the line to make the score 1-all in their HKHA Premier Division match at the Football Club ground on Sunday Dec 1, 2013. The final score was 5-all. (Bill Cox/Epoch Times)
International

Hong Kong field hockey is continuing to gather momentum and is attracting ever larger crowds eager to see international stars competing against local stars each week. On the weekend the Punjab-A team with four Olympians played the Hong Kong Hockey Association Premier League leaders HKFC-A and again brought out a big crowd, this time to the HK Football Club Ground, to see this top of the table clash … and they weren’t to be disappointed.

Not only was the stand full, but some people were standing along the perimeter wall eager to see this important game and to see how Club—who also have a number of U21 international and senior international players in their team—would fair against Punjab and their Olympians.

National coach Mark Kake, who was playing for Valley-A against Pak-A at the Valley Ground, was most-disappointed that he could not see the Punjab-HKFC match. He asked the Hockey Association if they could bring their match forward earlier in the day, but the request was refused.

However, HKHA officials, along with other managers and coaches of teams not playing at that time, also came to watch. This is the degree of interest that the new players are having on hockey in Hong Kong.

What was also pleasing was that Sunday’s (Dec 1) match was played with a mature attitude without confrontation with umpires or between players. Meanwhile, spectators were well contained behind the perimeter wall.

Soon after the start of the match there was rapturous applause from Club supporters when they opened the scoring from a penalty corner. Then a penalty corner at the other end was well defended by the HKFC goalie, Vincent Cheung. And another shot by Sukhwinder Singh Gabbar skimmed across the goal, but just missed the target.

However, an attack by Punjab 25 minutes into the match, although initially saved by Cheung, was pushed into the path of Punjab’s Barkat Singh, who directed it goal-wards. It was hooked out by a Club defender, but a goal was awarded making the score 1-all.

An intense period just before half time saw three goals scored in five minutes. Two goals by Club—the first, a long ball found a HKFC attacker who fired it into the goal from the left side of the circle to increase the score to 2-1; and another attack just a minute later, made the score 3-1. A goal two minutes later by Punjab made the score 3-2 at half time.

HKFC scored again 9-minutes into the second half pushing the score to 4-2, but Waseem Ahmad scored twice with 17 and 12 minutes left on the clock to make it 4-all.

Club scored with 10 minutes of the game remaining to make it 5:4, but a drag flick penalty corner conversion by Abbas made the final score 5-all.

A memorable match enjoyed by all who watched, although at the end Sunny Bali the Punjab skipper was still bemoaning their lost chances.

SSSC Banned for Two
SSSC Club were banned for two games as a result of the investigation into the pitch invasion at Happy Valley on Nov 24. As a result teams that their A and B teams were scheduled to play have been awarded a 3-0 walk over (w/o) victory. Khalsa-A and Shaheen-A were respective w/o recipients last weekend.

This weekend competition leader HKFC-A and the HKFC-B side both have 3-0 w/o results against SSSC-A and -B, respectively. Meanwhile, other title contenders, Punjab-A and Khalsa-A play lower ranked teams and shouldn’t be troubled.

Standings
Despite drawing with Punjab-A, HKFC-A remain at the top of the standings on 22 points. Khalsa-A and Punjab-A are equal second on 20 points.