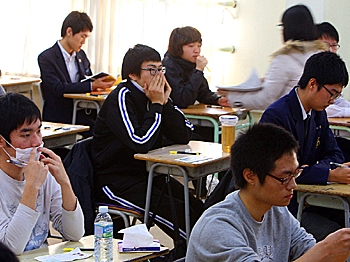 Joan Delaney
Senior Editor, Canadian Edition
Joan Delaney is Senior Editor of the Canadian edition of The Epoch Times based in Toronto. She has been with The Epoch Times in various roles since 2004.
View profile
Follow
biggersmaller
Print
A group is targeting foreign teachers of English in South Korea, alleging that they intentionally spread AIDS, molest children, rape Korean girls, abuse drugs, and are morally corrupt.

The Anti-English Spectrum Group has been vilifying foreign English teachers through the media, its Web site, and by members handing out flyers and pamphlets in the streets that contain defamatory information, says Dann Gaymer of the Association of Teachers of English in Korea (ATEK).

“Their claim is that they want to expel all illegal foreign teachers in Korea because they are causing untold damage to the infrastructure of Korea’s education system. But really their motivation comes down to very extreme nationalism and extreme xenophobia,” Gaymer says.

Some members of the 17,000-strong group also stalk foreign teachers, sometimes for months at a time, hoping to catch them in the act of doing something illegal, and have them kicked out of the country.

The group, which has had several negative articles about foreign teachers published in the mainstream media, is also suspected of being the source of a recent anonymous death threat to teachers, says Gaymer.

“A threat was sent in an email that a group called 'Kill Whites in Korea' is going to be formed and then they're going to start killing English teachers for Christmas,” Gaymer said.

Gaymer adds that the group is also circulating a “doctored image” of ATEK president Greg Dolezal, claiming he has AIDS and that he has had inappropriate relationships with students.

“They're trying to make it look like Greg has committed some sex crimes which for a foreign English teacher in Korea is absolutely damning," said Gaymer.

The police are investigating the death threats. The campaign against foreign teachers began with a party put on by some English teachers in 2005 after which distasteful photos of Korean women and Western men were posted online.

According to The Korea Herald, one of the women pictured explained that the group's Web site, the Naver Cafe, called the women "Westerners' whores" and "prostitutes." The women's personal information was released and they were harassed by members of the group, suffering “incredible mental anguish" that required psychiatric treatment.

“There has been a recurring theme with the Anti-English Spectrum Group—they have been very insulting and abusive toward Korean women who have anything to do with foreign men,” Gaymer says.

The fact that Canadian pedophile Christopher Paul Neil taught English in Korea before being arrested in Thailand in 2007 has added fuel to the fire. Although Neil is not known to have committed any offenses in Korea, the Anti-English Spectrum Group has used the situation to stoke anti-foreigner sentiment.

Of the estimated 20,000 foreigners teaching English in South Korea, an estimated 5,000 are Canadian.

Andrea Vandom, a doctoral student at the University of California who has taught in Korea, sent a letter to the Internet provider used by the Anti-English Spectrum Group asking them to remove the group’s site.

Endorsed by ATEK, the letter said the group tries to pass itself off as a citizens’ organization dedicated to ensuring “upright” English education. But the fact that it focuses only on non-Korean teachers while ignoring “instances of problematic Korean teachers … make the group’s agenda of racial hatred very clear.”

“There's always been a little ethnocentrism in Korea,” says Don Baker, associate professor of the Department of Asian Studies at the University of British Columbia.

The people involved in the anti-English teacher movement, Baker says, are products of an education system that for years taught that Koreans were a pure race.

“Until about five years ago Koreans were taught in school that Koreans were a pure race and unlike other people they've never had a mixture of genes; they're a pure people," said Baker. "The government has now changed that because they've got over a million foreign workers there.”

Baker, who travels to South Korea frequently, says the situation is exacerbated by the fact that the country has a shortage of women as a result of selective abortion.

“Koreans want to learn English, but they get turned off by the behavior of the foreigners, especially when foreign men are dating some of the more attractive women in Korean society when there's a shortage of women in Korea," said Baker.

He also notes that Koreans are “extremely nationalistic” and take offense when some English teachers show their ignorance of and lack of interest in Korea’s 4,000-year culture.

“I've seen Westerners in Korea who show, just the way they talk, that they really have no clue of the sophistication of Korean culture, and that really irritates Koreans," said Baker.

Younggoog Park, minister-counsellor of Public Affairs at the Korea Embassy in Ottawa, told the CBC’s "The Current" that the “reactionary views and opinions” of the Anti-English Spectrum Group don’t represent the general sentiment of the Korean people toward foreign teachers.

“Even though they don't speak for every Korean, the problem is they're still causing damage and that's what we've got to work against," Gaymer said.