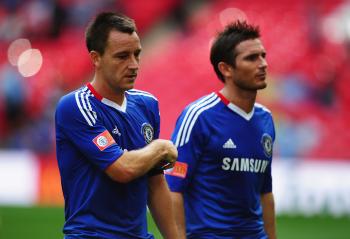 James Poulter
View profile
Follow
biggersmaller
Print
The 2010–11 English Premier League title race may yet turn out to be one of the closest for many years.

It was widely believed over the summer that Chelsea would once more be the dominant force, but a poor pre-season run of form, culminating in a 3–1 loss to Manchester United in the Community Shield, has re-opened the debate.

With no English club in the 2010 Champions League final—for the first time in six years—it is clear that overall performances have declined, and Jose Mourinho is quite right to say that the Manchester United that Chelsea pipped to the title last season, is not of the same caliber as the Manchester United team he defeated with Chelsea to claim the title in 2005 and 2006.

Add in to the mix the exorbitant spending of Manchester City this summer, increasing substantially their already star-studded line up, and also the never-too-distant threat of Arsenal, with their beautiful style of football so successful for Spain in the World Cup, and this season will be riveting.

Also, both a rejuvenated Liverpool and growing-in-confidence Tottenham Hotspur will be keen to stake their claims, and, even if not directly pushing for the title, they will definitely be able to influence its outcome when playing against the top teams.

This may well be another season that we really come to appreciate the managerial qualities of Sir Alex Ferguson yet again. For once operating on a tight budget, he has already displayed his acumen in picking up Javier Hernandez just before the Mexican striker’s value skyrocketed at the World Cup.

It is also worth remembering that last season Ferguson had no less than 17 players missing through injury for two months or longer, a run of bad luck unlikely to be repeated this year. Seen in this light, losing out to Chelsea by only one point in the last campaign is all the more impressive.

Furthermore, if last season’s runners up are able to acquire Germany World Cup star Mesut Ozil before the transfer window closes, they will surely be in a position of strength. Talisman Wayne Rooney has already shown that he has shaken off his World Cup blues.

A happy camp will be as vital as ever this year, and if under these conditions Manchester United are able to claim a record 19th title and overtake Liverpool as the most successful league club in England, Sir Alex Ferguson’s legacy will be beyond reproach.

Manchester United’s chief rivals for the title, Chelsea, have their work cut out to recover from a worrying pre-season slump. However, last season’s double winners will be relieved to have a gentle introduction to the campaign, not meeting a top side until their sixth match.


Carlo Ancelotti’s men appear to be suffering form a prolonged World Cup hangover. Of their 18 full internationals not one made it beyond the last 16 of the tournament, and there are many tales of personal woe, not least for shamed French striker Nicolas Anelka.

In addition, Chelsea are now an ageing squad, with both Frank Lampard and Didier Drogba being 32-years-old.