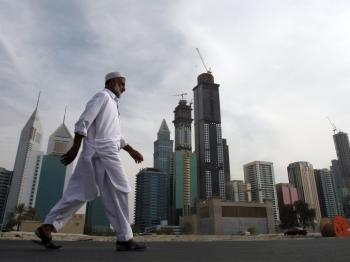 A man walks at the construction site of Dubai's Business Bay in the Gulf emirate on November 29, 2009. (Karim Sahib/AFP/Getty Images)
Middle East

End of the Road for Dubai’s Rapid Development

DUBAI, United Arab Emirates—It may be home to the world’s tallest building, the largest man-made island, and the most exclusive hotel—but Dubai’s grand ambitions for the future could be dead in the water, after its largest state-owned developer sent shockwaves through world markets by asking for a standstill on repaying its debt.

The fallout from Dubai World’s request to postpone repayment of its US$59 billion debt, may damage the reputation of the emirate as a hub for business, experts say. So much so that getting overseas bank funding for future projects could be near on impossible.

“This has done huge damage to the financial reputation of Dubai,” said Jim Krane, author of "City of Gold, Dubai and the Dream of Capitalism."

“It’s a society that aspires to be a business hub for the region and now it is seeing its financial credibility going down the drain. This flies in the face of everything that the leaders of Dubai have worked for.”

Dubai has grown from a quaint fishing village in the 1950s, whose main economy relied on pearl diving, to become a sprawling metropolis of gleaming skyscrapers.

In January, the emirate will formally open the 818-meter tall (2,683.73 feet) Burj Dubai, the crowning achievement of more than half a century of rapid development.

However all is not well. Over the course of the last two years, a steady stream of signature projects—including two more Palm islands owned by Dubai World subsidiary Nakheel—have been put on hold, leaving thousands of property investors out of pocket.

On Monday, a ripple of panic went through markets in the world when it became clear that the government would not underwrite the debt of Dubai World, its largest conglomerate.

“It is correct that the government owns Dubai World, but the decision when it was set up was that it should receive financing based on the viability of its projects, not on government guarantees,” Abdulrahman Al Saleh, director general of the emirate’s Department of Finance, said in an interview with Dubai TV, when asked whether the government was backing the debt.

“The lenders should bear part of the responsibility.”

The move may have implications for foreign banks that are exposed to Dubai’s debt—ncluding the U.K.’s HSBC, RBS and Standard Chartered.

The announcement comes after the UAE Central Bank said on Sunday that it would provide liquidity for local banks exposed to the debt.

According to Krane, the loans could have been offered to Dubai World on a preferential basis because there was the perception that this was sovereign debt.

Dubai analysts have called the relationship between Dubai and its state-owned companies a “nebulous” one.

“Everything that is connected with Dubai will decline in value,” said Krane. “It will be very hard to repair the damage that has been done.”

On Nov. 25, the Dubai government announced that Dubai World would seek a standstill agreement with creditors and an extension of loan maturities until May 30, 2010. The move led to the biggest decline in Asian shares in three months and Europe’s worst rout since April.