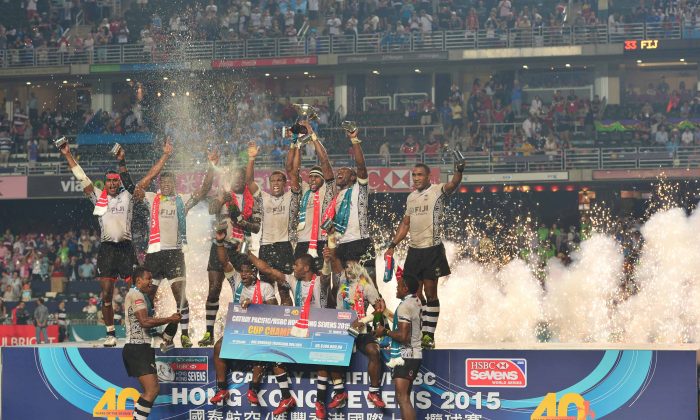 The Fiji sevens team celebrate their win in the Cup Final of the Hong Kong Sevens 2015, at the Hong Kong Stadium on Sunday March 29, 2015. (Bill Cox/Epoch Times)
HK Rugby Union

HONG KONG—Sunday morning (March 29, 2015) at the Cathay Pacific/HSBC Hong Kong Sevens begins gently. The crowd is quiet and still dreamy from festivities the night before. The South Stand barely a quarter full. Despite the subdued atmosphere, Sunday Sevens is all about knock-out rugby, and winning finals. At stake today, the honour of qualifying for next year’s Sevens circuit, plus the Cup, Plate, Bowl and Shield in the Main competition, and valuable points towards qualification for Rio in 2016.

The Qualifying final was between Russia and Zimbabwe. Russia reached the final by comfortably beating Papua New Guinea in the semi, 26-7; and Zimbabwe beat Spain, 24-14. Both matches pitted fellow group member against each other, and reversed the results from the group stage. The final was winner take all, with only one qualifying place. The match was closely contested. Zimbabwe led with a score two seconds prior to the final hooter, but they could not regain possession and Russia scored a runaway try from the restart to break the heart of the Zimbabwe players, and secure a narrow 22-19 victory.

In the Main competition, the Shield final was between Kenya and Japan. Kenya reached the final by beating Portugal in the semi 21-0; and Japan trounced Belgium 42-7 in their semi. The final marked a new record for the most tries ever scored at the Hong Kong sevens (26) for Collins Injera of Kenya, as Kenya ran out comfortable winners over Japan 26-7.

The Bowl final was between France and Scotland. France won an entertaining, high-scoring semifinal against Canada, 38-17 that perked-up the crowd post lunch: and Scotland achieved a comfortable victory over Wales 34-0. How they wish that was a Six Nations score! The final was a nail-biter. The game changed when France went down to six men, and Scotland scored two quick tries during that period. The icing for Scotland was a spectacular final try, created by an audacious through-the-legs pass by Joe Nayacavou to secure a 26-5 victory. It’s not often Scotland savour rugby victory; and this was done in style. They were worthy winners.

The Plate final was between Australia and the USA. Australia reached the final, through a quarter loss to South Africa, and then beat England 12-7 in a closely contested semi-final. The USA gave a lacklustre performance in their quarter losing to Samoa 26-15, but in the semi, impressed against Argentina winning comfortably 28-14. The final was a terrific match: end to end rugby. USA led 12-7 at half time, through an exhilarating intercept try by Perry Baker, but only after the TMO rightly denied Australia a try in the corner. Australian pressure in the second half created two tries, the first by Shannon Walker bustling over in the corner, then Cameron Clark sliced through the middle to score under the posts. The USA responded with a try by the impressive Madison Hughes, which set up a thrilling finale; where Australia just held on to win 21-17. It was a victory for Australia, but a credible showing for the USA who must now be recognized as a serious contender at sevens.

The 3rd and 4th play-off, saw South Africa beat Samoa 26-5. This is always a difficult match for teams to play. Both would prefer to be in the final, and both missed out on greater glory by a whisker, but these matches are determined by the closest margins.

The Cup final was between Fiji and New Zealand. Fiji arrived at the final beating England 14-12 in the quarters in an ill-tempered match, that tarnished reputations. They edged South Africa 21-15 in the semifinal, converting all their conversions, whereas South Africa missed theirs. New Zealand, who has looked vulnerable during the tournament, beat Argentina in their quarter, 31-21, and in the semi narrowly overcame Samoa 15-14, by scoring a penalty in the final minute.

This was a gladiatorial battle and fitting finale for three days of excellent rugby. Fiji opened the scoring after 3minutes with a try that displayed their unique running, passing and handling skill; only to be repeated 2minutes later, to establish a 14-0 lead. An interception try from their 22m line extended Fiji’s lead to 21-0, but New Zealand clawed one back on the half time whistle.21-5 to Fiji at half time. New Zealand began the second half strongly, scoring under the posts to close the score to 21-12. Only for Fiji to respond with a spectacular try, running the ball from deep in their half, and cutting through the New Zealand defence to move the score out to 28-12. New Zealand created space and scored again: 28-19 with 2minutes left. But there was more Fijian magic to come. With the ball in hand, they dummied, swerved and sprinted across the New Zealand try line to make 33-19. New Zealand had a final flourish, but Rieko Ioane was bundled into touch. Game over. Fiji had won. Deserved victors in the final: there was not an element of their game that could be faulted, excellent defence and simply spectacular with the ball in hand.

They will be celebrating in Suva tonight; and Hong Kong too. This was an emphatic victory for Fiji, who always seem to save their best for Hong Kong. To the sound of Queen and Tina Turner, along with fireworks, and the resonant sound of an electronic bagpipe Hong Kong’s Fortieth came to an end.