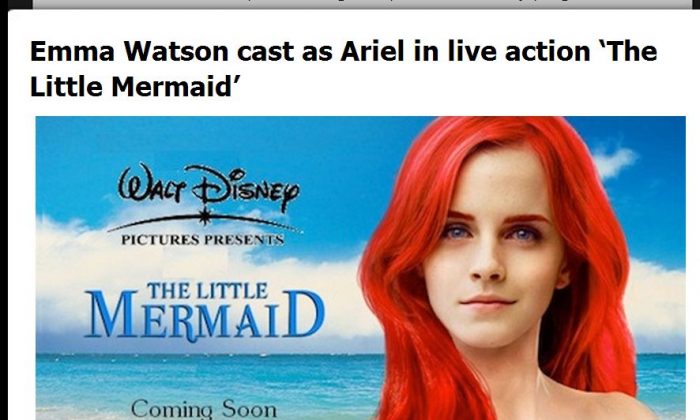 Emma Watson: Ariel, ‘The Little Mermaid’ Poster Isn’t Real; She Will be Belle in ‘Beauty and the Beast’

Emma Watson will not be starring as Ariel in a live-action remake of “The Little Mermaid,” and a poster and article saying otherwise was an April Fool’s Day joke published on a Harry Potter fan website last year. Watson, however, will play Belle in a “Beauty and the Beast” film.

“I saw a thing earlier this morning saying there’s talk of a Little Mermaid live action movie to be released in 2015 starring Emma Watson and Daniel Radcliffe,” reads a viral Facebook post, which also shows a photo of Watson with bright pinkish-red hair near the beach.

Radcliffe won’t be in a “Little Mermaid” movie, either. The photo of Watson as Ariel was published April 1, 2013, on MuggleNet, a fan site for “Harry Potter.”

It also includes a fake article about Watson being cast as Ariel.

“Emma Watson will certainly be living the princess lifestyle this year, after reports have linked her to different projects where she will portray classic Disney princesses Belle, from Beauty and the Beast as well as the title role in Cinderella (although Emma has since turned down that role). Completing the trio is Ariel, from The Little Mermaid, originally released as an animated feature in 1989,” the hoax article reads.

There are currently no plans to make a live-action version of “The Little Mermaid.”

The photo and article were created last year but went viral again this week. It’s unclear why.

However, she will play Belle in “Beauty and the Beast,” according to reports last year. Guillermo del Toro will direct the film.

Watson appeared as Hermione Granger in the “Harry Potter” movies from 2001 to 2008.

She most recently was spotted at the Academy Awards ceremony in Los Angeles. And she’ll be appearing in the “Noah” movie that is slated to come out later this year. Russell Crowe will have the title role in the movie.