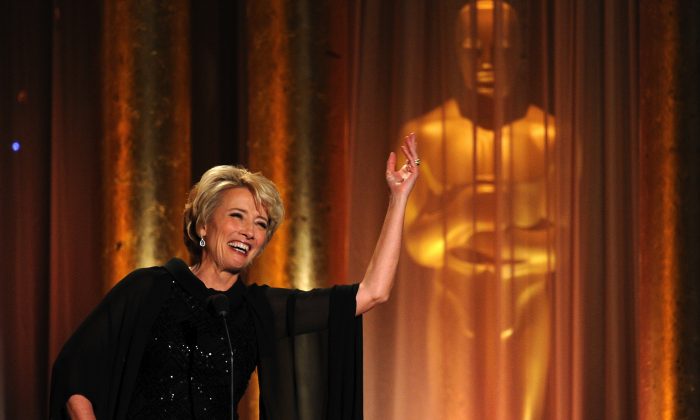 The only person with Oscars for acting and writing, Emma Thompson talks nannies, money and dating Dr. House

Question: In Saving Mr. Banks, you play P.L. Travers, who wrote Mary Poppins and who was, like you, an actress and a writer. Any other similarities?

Emma Thompson: No. She was very troubled. Her father was an alcoholic. Her mom tried to commit suicide, and she had to stop her. I like to please people. She was not interested in that at all.

Q: Travers didn’t want Disney to make Mary Poppins because she abhorred the Disneyfication of classics like Winnie the Pooh. What do you say to people who agree with her?

Thompson: Well, I agree with them. I deplore the Disneyfication of some of it. But then I look at Bambi and I look at Dumbo and Mary Poppins, and I think, You’ve got to be made of stern stuff to watch those movies. Disney had a very Dickensian childhood. Disneyland was a way of rendering the world a safe place for himself and other children.

Q: You have a teenage daughter. Did she look at your hair in this film and say, “Mum, no”?

Thompson: Everyone looked at me like an infant woolly mammoth. So yeah, she did. But she’s a goth—I do her hair up in spikes. As soon as she became a goth, I thought, Whew, thank God. We’re O.K.

Q: In your youth, you dated Hugh Laurie, whom people know as Dr. House.

Thompson: He was rowing in the Oxford and Cambridge boat race. He was enormous and eating steak all the time. And asleep for the rest of the time.

Q: If I gave you a magic wand, what one change would you make to the world?

Thompson: I would destroy and remove the monetary system.

Q: A modest change, then.

Thompson: The system is a cataclysmic failure.

Q: In the movie, Disney says artists “restore order with imagination.” Is that how you see it?

Thompson: My godfather said that story was about taking the chaotic jigsaw of life, making it into a picture and putting a frame around it so that we could look at it, have control over it. Story and art are the humanizing elements of us.

This article was written by Belinda Luscombe for Time Magazine.