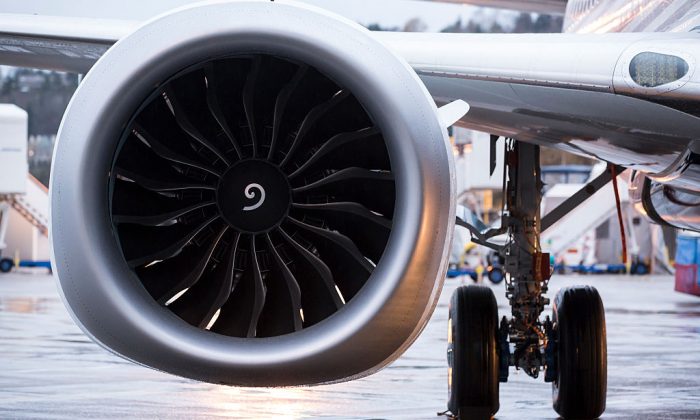 A LEAP engine is pictured on the first Boeing 737 MAX airliner is pictured at the company's manufacturing plant in Renton, Washington on Dec. 8, 2015. The plane is the newest, most fuel efficient version of Boeing's best-selling plane. (Stephen Brashear/Getty Images)
Tech News

Emirates’ ‘Diamond Encrusted’ Boeing 777 Goes Viral, Is Not What It Seems

A photo that purports to show a “diamond-encrusted” Boeing 777 isn’t what it seems: it’s actually a very clever Photoshop job.

The airplane is shown parked in a terminal at an undisclosed airport, surrounded by trucks while shining in the sunset.

The image was originally created by Sara Shakeel, a crystal artist, reported the Gulf News.

The picture, however, fooled a lot of people. “Is this real or Photoshop,” asked one person, and another person added: “Is this real or am I dreaming? Please say this is real, it’s so beautiful.”

So My plane has been on the news lately, confirming whether it’s real or not, so before I took off I took another picture just to let you guys know it’s real 🌝😛💎💎✈️ . . . P.s thank you guys ! I truly and honestly made the diamond plane for the love of the trip and the excitement! Never in a million years did I know it’ll end up on news / tv / trending on #twitter all over the place ! So thank you a million times! 🙏 . CollageArt SaraShakeel . . . #art #collageart #plane #diamonds #vision #emirates #clouds #diamond #crystalart #arte #hope #edit #editing #bright #creation #Creative #imagine

“My plane has been on the news lately, confirming whether it’s real or not,” she also wrote, adding “I truly and honestly made the diamond plane for the love of trip and the excitement (sic).” She added that she would never think it would have gone viral, being featured on news websites. On Instagram and Twitter, tens of thousands of people shared the photo under the impression that it was real.

An Emirates spokesperson told Gulf News that Emirates didn’t have one of its planes covered in diamonds and jewels.

“We just posted an art piece made by crystal artist Sara Shakeel,” said the spokesperson. “I can confirm it’s not [real].”

One person on social media said the weight of the crystals and diamonds would create serious problems.

“Unfortunately not possible technically. The plane will have added extra weight and some serious safety issues then,” the person said.

Asked another person, “People seriously think the inside of the engine is covered in diamonds????” Said another, “Fake! … Unless aircraft engine intakes can work stuffed full of rocks? Take a closer look folks!”

Another joked: “Lmao the weight of those rocks will weigh that bird down so much.”

For example, she added crystals to the steam of a cup of tea or coffee.

PositiviTea ☕️ ✨💎 . . . Thank you everyone for the love and prayers! I win or not , each and everyone of you represents my winning and that’s all what matters! 💎✨💎✨ thank you once again for embracing my Everyday visions and making it a part of your life. 💎 truly humbled ✨🙏 . . . CollageArt SaraShakeel . . . #art #collageart #artwork #vision #patience #hope #love #loveyourself #lovemyjob #crystals #diamonds #morning #wait #god

Humble Sunsets 🌅 💎 . . I feel sorry for a few, who believe a bunch of followers a verified badge and some greens 💵 make them look authentic, and can buy anyone’s work for a few $$$$ ! And when you say NO, they get ugly , either through their words or actions ! I hope these so called “people “ get well soon !! Cause you might find a 1000000 people to replace me, but you’ll still have a black heart that’ll always show , and I’ll always be there with a maybe not as many 💰 💵 as you have but lots and lots of peace! Be humble ! No one stays in the light for Long, BUT a few with respect have a LIGHT of their own that will glow on forever! Be a light ! ✨💎 . . P.s I have something coming up with @bally you guys !! Can’t wait to share that & another surprise 🌝✨ . . CollageArt SaraShakeel . . . #art #collageart #artwork #vision #patience #love #arte #newyork #newyorkcity #city #light #heart #hardwork #hope #creations #Creative #gold #crystals

How to Tell When Something is a Hoax?

“The classic hallmark of an urban legend is FOF, or friend-of-a-friend. Something happened, not to you, not to your friend, but to a friend of your friend. Online, your “friends” may not be people you actually know. They may not even be real people. Don’t make choices based on FOF until you’ve done some checking around,” says the King County Library System website.

“If it seems too good to be true, it probably is,” it adds. “That nice Nigerian man is never going to give you huge amounts of money for helping him liberate money from his dead uncle’s bank account. (Do you even know anybody in Nigeria?) The FBI calls these “Advance Fee Schemes” and people fall for them all the time—losing their own money in the process. Don’t be one of the losers!”

It also says not to believe every negative thing you hear about well-known people.

“At the opposite end of the spectrum, don’t believe every bad thing you read about public figures. As extreme as some celebrities and politicians may be, none of them have done everything they are accused of doing,” the website says.

It said that when posting, consider if it will do any harm to post.

Why Create an Internet Hoax?

“People have various motives…Some people might be overly helpful. They could have some information, and then embellish it. Others might be outright malicious…[These] are probably fantasists, anxious to help or to associate themselves with events…A lot of callers are attention-seekers,” he said.

“They may be people who feel they make no impact on the world, and this is one way they can do that, rather as fire-setters start fires then stand back to admire their handiwork. They see people running around and think `I did that!’ For people who feel they have no power, it is the capacity to influence events,” he stated.

“There may be an element of exhibitionism, of getting into the public eye,” Wilson added. “For the time on the phone, at least, everybody is terribly interested in what they’ve got to say. Anonymity spoils things, but they might deliberately then get caught, and might even become famous as a result, in a rather lesser way than those who kill a celebrity: they get fame in a very backhanded way. [Not all nuisance callers are knowing hoaxers: some probably, genuinely believe they have something to offer]. I suppose they may think they are being helpful…perhaps telling police where a body might be found. They might really think they are psychic. They’re not trying to be obstructive; they just want to get in on the act.”