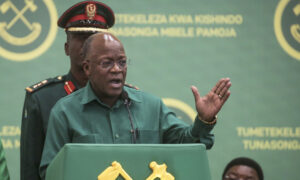 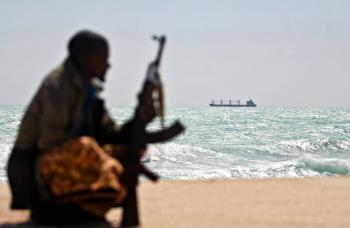 An armed Somali pirate along the coastline while the Greek cargo ship, MV Filitsa, is seen anchored just off the shores of Hobyo town in Northeastern Somalia where its being held by pirates. (Mohamed Dahir/AFP/Getty Images)
Africa

By Epoch Times Staff
biggersmaller
Print
Eleven Somali pirates have been sentenced to 15 years each in prison by a court in Berbera, Somalia, according to an AFP report.

The pirates were arrested in December 2009 when they attacked a NATO forces ship, which they mistook for a commercial ship. The pirates were overpowered by the crew, disarmed, and released but Somali coastguards arrested them afterward when they were spotted in a little village near Djibouti.