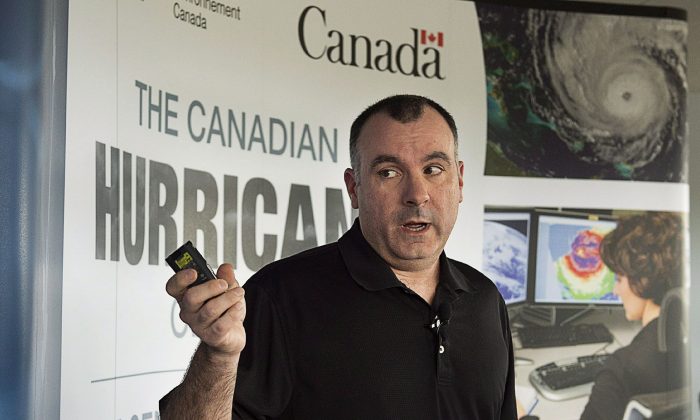 Rob Robichaud, a meteorologist at the Canadian Hurricane Centre, addresses a news conference in Dartmouth, N.S. on May 22, 2014. Hurricane activity in the North Atlantic is expected to be near below-average this year due to lower ocean temperatures and the influence of an El Niño, which is expected to start this summer. (The Canadian Press/Andrew Vaughan)
Canada

Meteorologists are predicting that a significant El Niño is expected to strike this summer, which could mean extreme weather in Asia, Australia, and the Americas, but a milder winter for Canada.

Both the Climate Prediction Centre in the U.S. and the U.N.’s World Meteorological Organization have confirmed that warming sea temperatures in the Pacific indicate a 70 percent chance an El Niño will occur this summer. Several Asian media are reporting that a big El Niño is set to begin this month.

“Everybody’s been chatting about it. It’s kind of big news in the weather services. And it’s been a while since we’ve had one,” says David Phillips, Environment Canada’s senior climatologist.

Countries that tend to be the hardest hit are scrambling to prepare for the El Niño, a pool of abnormally warm water in the Pacific Ocean that can wreak havoc on weather systems. The phenomenon has been known to unleash floods in the Americas while causing drought in Southeast Asia, Africa, and Australia.

There is much debate around how severe this year’s El Niño will be, however, with some meteorologists forecasting a moderate event while others predict it will be severe.

The weather pattern—which is known for bringing wetter winters to parts of the southern U.S.—is being highly anticipated in places like California, which has been suffering from a three-year drought. It could also be good news for Florida and the Caribbean as El Niños tend to suppress tropical storms in the Atlantic.

“For some people it spells doom, and for others it’s something that they look forward to,” says Phillips, adding that an El Niño could mean an unseasonably warm winter for Canada.

“It’s going to be generally a mild winter next year in Canada. But how mild? It could be record-mild, or just mediocre—that’s really yet to be determined,” he says.

“Generally El Niño makes our winters a little softer, a little more open, not as cold and snowy as we certainly saw last year.”

South American regions such as Peru and Ecuador usually don’t fare so well in El Nino years and are bracing for floods, while parts of Asia, Africa, and Australia could face worsening droughts. Indonesia and the Philippines tend to be hit the hardest.

Despite the potential for disaster, countries can prepare for an El Nino before it strikes, says Phillips. Planting particular crops to handle an increase or decrease in precipitation, improving emergency preparedness systems, and mobilizing resources early can do a lot to mitigate negative effects.

“That’s why it’s so important to know the presence of El Niño well in advance—you can help to cushion the blow,” he says.

According to news reports, several countries in Asia are preparing to draw on stockpiled foods such as rice, wheat, and sugar if the fallout from the El Niño results in crop losses.

The last El Niño occurred during the 2010 Winter Olympics in Vancouver when an unseasonably warm, rainy January meant that snow for the Olympic courses had to be trucked in at the last minute from mountains in the B.C. Interior.

But a severe El Niño—the kind that leads to fatalities and global implications—has not been seen since 1997/98, which was the strongest on modern record.

The extreme weather caused flooding, typhoons, droughts, and related side-effects such as increased water-borne diseases, wildfires, food shortages, and economic devastation. At least 23,000 people were killed and the damage was estimated at over $30 billion worldwide, according to Science magazine.

Most western Canadians remember 1997 as their first “brown Christmas” with little or no snow in places like Winnipeg, Saskatoon, and Edmonton. That year it was warmer on the Canadian Prairies than in Mexico City; there was knee-deep snow in Guadalajara for the first time in 116 years.

The El Niño mildness didn’t extend across the country, however. Atlantic Canada suffered through one of its coldest and snowiest starts to winter on record, while Quebec and Ontario endured severe ice storms.

“It’s been a while since we’ve had an intense El Niño, and this could very well be one,” says Phillips, adding that more will be known about its degree of severity by the end of August.

“If the oceans warm up and they’re warm for a long [span], that heat will get into the atmosphere, affect the jet stream, affect the highs and the lows, and therefore affect the daily weather. That’s what we have to wait and see, and it will take a few months before we can see that connection.”