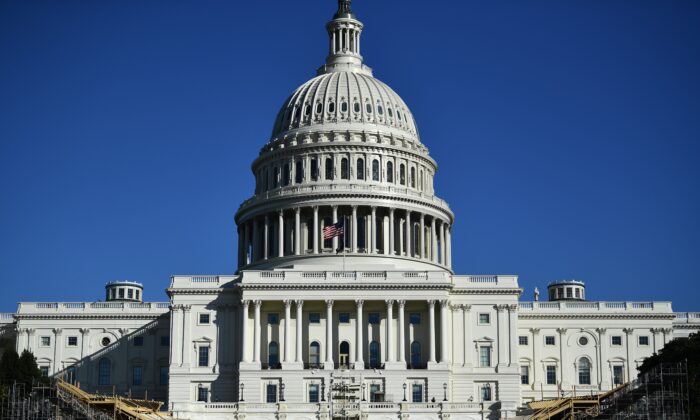 I used to think that cry was excessive, an unrestrained accusation of some semi-existent phenomenon called the alt-right. The East German Stasi, after all, topped even the KGB when it came to intruding on the private lives of citizens, fundamentally destroying the individual at the hands of the state.

Our lack of privacy, not to mention the increased ability of the government to spy on us, has been ratified by 80—count ’em, 80—House Republicans, including Minority Leader Kevin McCarthy (who wants us to see him as a viable replacement of, an actual savior from, Nancy Pelosi) and Burgess Owens of all people (Et tu, Burgess? Who can we rely on now?)

What these GOP members of what seems more and more like the People’s Congress of Cambodia under Pol Pot have voted for en masse, joining 100 percent of the Democrats (something suspicious right there), is a bill to fund a federal vaccination database.

Known as the Immunization Infrastructure Act (H.R. 550), this baby would provide $400 million of your dollars and mine for an “immunization system data modernization and expansion” of “a confidential, population-based, computerized database that records immunization doses administered by any health care provider to persons within the geographic area covered by that database.”

In other words, it’s a handy way to get the “wrong” people fired, ostracized, or whatever, while getting their children kicked out of school.

OK, in some sense, this is already redundant. If one or more of our 17 government intelligence agencies really wants to know if we are vaccinated or not, they can probably discover that—and a lot more, alas—in minutes. Further, the medical community shares similar information automatically.

But this doesn’t make H.R. 550 any better. It actually makes it worse. They didn’t have to do this. It puts a rubber stamp, a Good Housekeeping seal of approval, on what we already know. Our privacy isn’t only dead, it’s decomposed.

Don’t be a fool, citizen, and think it’s otherwise. This is the new order. “1984” is not a novel of dystopian warning. It’s an instructional manual on how to live now.

Why would those 80 Republicans then want to participate in this? They read Orwell in high school or college—theoretically anyway. They presumably shook their heads at how bad it was, confident it could never happen here.

Nevertheless, they voted for it.

Some, or even a majority, may be doing the obvious bidding of their huge Big Pharma benefactors.

Others may actually believe they are doing good. The bill’s main sponsor, Rep. Ann Kuster (D-N.H.), claims the system will “remind patients when they are due for a recommended vaccine” and “ensure equitable distribution of vaccines.” (Of course.)

What they are actually doing is the bidding of Lord Fauci and his version of “science” that ignores the widely acknowledged fact—it is, in itself, basic science—that natural immunity is vastly superior to any form of vaccination in preventing COVID-19.

Therefore, lining up for vaccines many not be all that it’s cracked up to be, that, especially for our children, as mRNA inventor Dr. Robert Malone insists, the risk far outweighs the reward.

It’s hard to imagine the 80 Republicans could be so gullible as to still believe the Fauci/CDC tripe that changes with the wind, yet somehow always winds up in recommending the consumption of more products from Pfizer, Moderna, et al.

Haven’t at least their staffs read any of the three best-selling—and highly informative—books on what has transpired in the past few years by Alex Berenson, Dr. Scott Atlas, and Robert F. Kennedy Jr.? If not, why not?

The answer to that might be scary but not quite as scary as the voting list itself that we should all make ourselves read. There are a number of surprises in the “yes” column, not just the aforementioned Mr. Owens.

Normally, we could think, well, primary them. But 80? What a situation!

Of course, there’s always the Senate. H.R. 550, or some version thereof, has to pass there. Who will stand up against it?