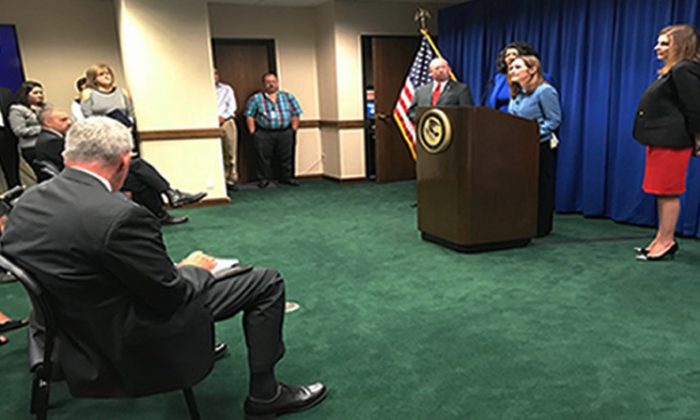 MS-13, or as it is called formally, Mara Salvatrucha, is reputedly the largest street gang in the United States today. The gang’s activities are characterized by excessive violence, usually but not always aimed at members of rival gangs, their friends, and their families.

The gang started in the Los Angeles area in the 1980s, formed by exiles from El Salvador fleeing that country’s civil war. It has grown to the biggest and most violent gang in the nation, spreading as far as New York state from its West Coast origins.

“MS-13 is one of the most violent and ruthless gangs on the streets today,” stated Cox in an ICE press release.

“Working with our federal, state and local partners, we are determined to dismantle this organization wherever we find it in order to make our communities safer in Texas.” Cox explained at the press conference.

Seven of the eight were already in custody, Cox told the press. Six were in state custody and one had just appeared in federal court the day before.

“The Department of Justice will not allow MS-13 to terrorize any community, school or street corner,” said Attorney General Jeff Sessions in the ICE release.

“The gang has more than 10,000 members following its barbaric motto of ‘kill, rape, and control’ across 40 states, and that threatens law-abiding Americans,” he continued.

“Today’s indictment of eight MS-13 members—including five who are charged as illegal aliens in possession of firearms—makes clear that the Trump Administration and this Department will continue to go on offense against MS-13 with every lawful tool at our disposal,” he said.

Katherine Greer, a deputy special agent in charge of Homeland Security Investigations, told SFGate that the gang members are in the U.S. illegally, and that most were from El Salvador.