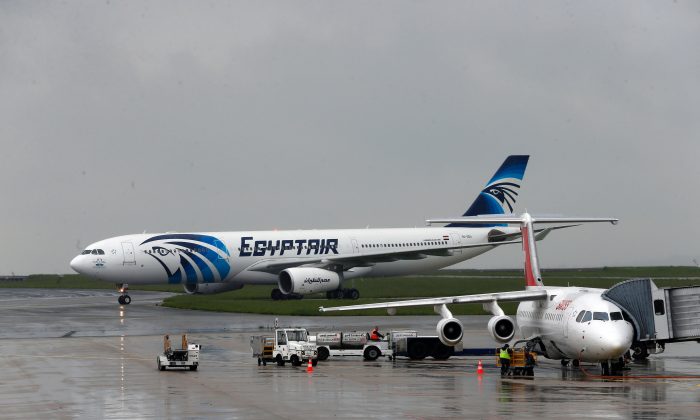 An Egyptair Airbus A330 (L) from Cairo taxiing at the Roissy-Charles De Gaulle airport near Paris after its landing a few hours after the MS804 Egyptair flight went missing. (Thomas Samson/AFP/Getty Images)
Aviation News

The black box from an EgyptAir jet that crashed in the Mediterranean Sea last month is expected to stop emitting signals on June 24, investigators said on Monday.

The two separate pieces of equipment—a cockpit voice recorder and a flight data recorder—is called a “black box.” They contain vital information, including any conversations inside the cockpit just before the May 19 crash of Flight MS804, which killed all 66 on board.

On the day of the crash, the Greek defense minister said the plane swerved from left to right before losing altitude and ultimately disappearing from the radar at around 15,000 feet.

This is different from what Egyptian Air Navigation said: EgyptAir had initially reported the plane was at a cruising altitude of 37,000 feet before it disappeared off the radar.

Investigators revealed in a statement on June 13 that new Egyptian military images confirm that the plane had turned sharply in mid-air before crashing, according to Daily News Egypt. “This comes in accordance with [earlier] British and Greek radar images,” the statement said.

This conclusion rules out the possibility that a mid-air explosion brought down the aircraft.

Though the recent findings provide some substantial clues, investigators affirm that it isn’t sufficient to determine a likely cause for the crash. To do so, the recovery of the plane’s black box remains crucial.

According to Remi Jouty, head of France’s air accident investigation agency, investigators will need to pinpoint the signals from the boxes to within a few meters and establish whether the “pingers” are still connected to the devices.

The Egyptian-led committee approved a request by the U.S. National Transportation Safety Board (NTSB) to have an American representative join the team. The plane’s engines were built by a consortium led by U.S. firm Pratt & Whitney.