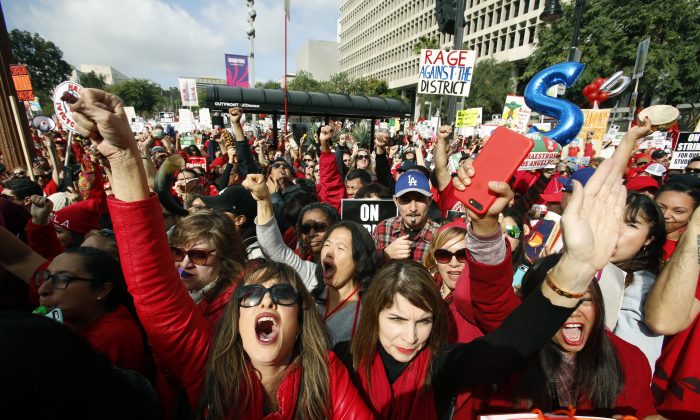 Educators rally as a strike against the Los Angeles Unified School District entered its fifth day outside City Hall in Los Angeles on, Jan. 18, 2019. (AP Photo/Damian Dovarganes)
US News

Effectiveness of Smaller Class Sizes Unproven but Teachers Strike for Them

LOS ANGELES—Most educators and parents see class size as an indicator of a quality education and have made it a priority in teacher strikes across the United States in the past year, but its effectiveness is still up for debate.

There’s no universal standard for the best class size, although some states and school districts have instituted policies, particularly in lower grades. While many believe smaller is better, studies are mixed on exactly how much it can improve academic outcomes, considering the cost.

The ratio of students to teachers is at the heart of a teacher strike in the nation’s second-largest school district, where tens of thousands of Los Angeles educators walked out Jan. 14. Teachers have complained about having kids sitting on window sills or the floor of overcrowded classrooms that can push past 45 students.

Farther north, some teachers in Oakland called in sick Jan. 18 as part of an unofficial rally over their contract negotiations, which also hinge partly on a demand for smaller class sizes.

At the high school level, Los Angeles has routinely had more students per teacher than the national average, said John Rogers, a professor of education at the University of California, Los Angeles.

He said there’s no easy way to assess the impact of class size on educational outcomes over the last couple of decades in the Los Angeles Unified School District—in part because classes have been overcrowded despite a state mandate calling for an average class size of 30 students through eighth grade.

Rogers said the question of whether districts should be able to increase class size unilaterally is important because it makes teachers feel they lack control over learning conditions.

“When your class size can be increased dramatically, you lose the ability to ensure that you can do right by the students you are serving,” Rogers said.

United Teachers Los Angeles is demanding the elimination of a longstanding contract clause giving the district authority over class sizes. If the district won’t agree to remove the provision, union leaders say they can’t trust that school officials won’t ignore any deal it cuts on class sizes in the future.

The district has insisted on replacing the clause with new language that also grants it the power to raise class sizes under certain conditions, including a financial emergency. It said its latest contract offer included $100 million to add nearly 1,000 additional teachers, nurses, counselors, and librarians in 2019-20 and reduce some class sizes. Schools with the greatest needs would see larger reductions—about four students per class.

But union President Alex Caputo-Pearl said the district’s offers were limited to one year and then class sizes could spike again and new staff could be cut. He has called class size a “fundamental issue” that’s directly “about educator working conditions.”

Superintendent Austin Beutner has said he would like to reduce class sizes even more but the district simply doesn’t have the money. He has suggested the union might consider trading other contract demands for greater reductions in class size.

Brent Smiley, a 23-year district veteran who teaches at the Sherman Oaks Center for Enriched Studies, said he’s had as many as 42 students in one class and that his smallest has 39.

“Struggling to keep them focused can be an impossible task,” he said this week.

A 2016 report by the National Education Policy Center suggested class sizes be set as low as 15 students in lower grades and found that all things being equal, the student ratio affected their academic achievement.

William Mathis, who authored the study as an education policy expert at the University of Colorado, pointed to a 1979 study that tracked young students in smaller classes in Tennessee and saw lasting effects. The children had better grades and test scores, fewer disciplinary issues and an increased likelihood of going to college.

The gains were twice as large for poor and minority students and so convincing that, in 1998, President Bill Clinton pushed a $12 billion class-size-reduction program through Congress, though academic disparities remain.

Mathis contends that smaller class sizes in younger grades work because teacher quality improves and getting more attention helps children develop skills, such as establishing peer groups and positive attitudes, that are needed to progress to more intense learning.

The bigger the class, the more likely you are to treat kids as a big group, and you don’t read papers as good, you don’t read them as closely, you don’t have as much attention to give to each child,” Mathis said of teacher quality.

But Matthew Chingos, vice president of the Urban Institute’s Center on Education Data and Policy, is skeptical of a one-size-fits-all approach. He’s studied state-regulated class sizes and says that it may not be the “biggest bang for the buck” for every classroom.

Requiring a school to have more teachers is expensive and potentially problematic, he argues, because it limits local control at the campus level, which in turn can dilute teacher quality.

California tried to boost its reading and math scores between 1996 and 2013 with a program that gave extra money to schools if they reduced kindergarten through third-grade classes down to 20 students.

That experiment, Chingos said, didn’t prove its worth because there was no prior data for comparison.

Without more high-quality research, Chingos said parents and teachers both push for smaller class sizes based largely on their intuition that it’s better for children. Teachers also benefit, including adding to the union ranks, he said.

“Class sizes are a political winner. No one thinks it’s bad. If money grew on trees, then sure,” Chingos said.

By Sally Ho and Christopher Weber. From The Associated Press.