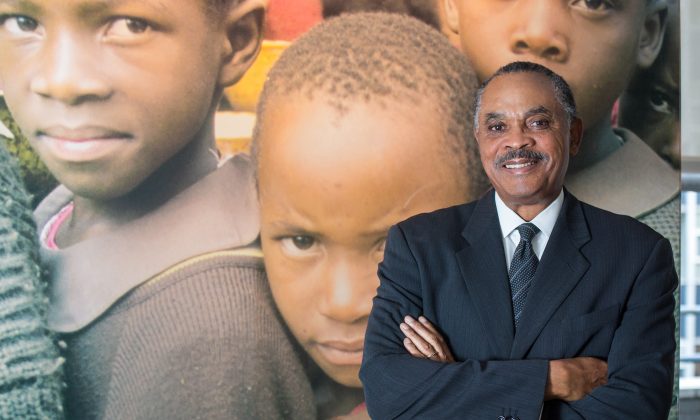 Edward G. Lloyd, COO and CFO of the U.S. Fund for UNICEF, at headquarters in the Financial District of Manhattan, New York, on Nov. 2, 2015. (Benjamin Chasteen/Epoch Times)
New York

NEW YORK—Children ask many questions, that’s how they learn about the world. Edward G. Lloyd, chief operating and chief financial officer of the U.S. Fund for UNICEF, is good at asking questions too—in fact, he never stops.

Sitting in his sunny office at the U.S. Fund for UNICEF in downtown New York, he explained the challenges he faces every day as a series of questions, all leading to the same objective—staying focused on UNICEF’s mission.

“How do I institutionalize the kinds of administrative, financial, governance, and monitoring practices to ensure that the organization has a good foundation?” he said.

In the past 11 years, UNICEF has kept to its financial operating principle of funneling 90 percent of donation money directly to helping disadvantaged children around the world. “On the operation side, that is the biggest issue,” Lloyd said.

But there is a more fundamental question that remains constant on Lloyd’s mind. He painted a heartbreaking picture, which became even more poignant given his gentle demeanor.

Lloyd grew up in a poor, rural community in North Carolina of a few thousand people, with dirt roads and no running water, raised by a young, single mother. But Lloyd said he never went hungry and never felt he was unfortunate. He received plenty of hugs and love.

He has worked with children for a big portion of his career in the nonprofit sector. The compassion that he grew up with gave him his sense of service and responsibility that has extended from the personal to a global scale.

“I think that all children should have what my grandchildren have,” he said referring to opportunities and having a safe, supportive environment.

Although he acknowledges the progress that has been made in the past 15 years, bringing the number of dying children down to less than half from 34,000 to 16,000, “it is still too many,” he said. “The goal is zero. We believe that zero children should die from preventable causes,” he added.

Lloyd has to ensure that the U.S. Fund for UNICEF stays on course in terms of its strategic plan, in terms of managing the donor base, the brand, confidence of the board, the mix of revenue channels, and so forth, all while responding to an average of over 200 emergencies a year.

On the operational side he has to meet the budget, ensure all the compliance issues are in place, and make sure the necessary resources are provided for staff, celebrities, cyber security, and for meeting quarterly goals. Everything has to be balanced and transparent.

“I can tell you to the penny what we raise in a day, how much money is in the bank,” Lloyd said. “The one rule that I’ve always had and I think we all live by is that we must be able to pass the Ed Bradley test, if he were alive (or “60 Minutes” test), and if he said we heard x, y, or z about the U.S. Fund for UNICEF, I would invite them to see anything they wanted to see,” Lloyd said.

“The role that I think is really important is to make sure that from a sustainability, from a reputational, from just an ethical, or moral point of view, that we are running an organization that has the trust of the donors,” Lloyd said.

Children are the most vulnerable, especially in distressed areas of the world during conflicts and natural disasters. They are in need of the most protection, not only because they are children, but also because they are the future.

With one emergency after another, “one of the things that happens in our business is that you get donor fatigue,” Lloyd said.

Generally it is more clear-cut for donors to give to those suffering in times of natural disasters; it may be more confusing to give to people who are transient—as with Syrian refugees.

“People look at the region, they are wondering who are we giving to, are these people helping us, or are they hurting us,” Lloyd said.

He also stressed that even if some issues are not being covered in the news at all or as much, and therefore may be more easily forgotten, they still need to be dealt with.

Relief supplies, drinking water, safe spaces for children to play, learn and recover, and so forth are still needed after the earthquakes in Nepal, the Philippines, and Haiti, after flooding in Pakistan, the hurricane in Mexico, the tsunamis in Japan and South Asia. Humanitarian assistance is still needed for children in deeply impoverished Central African Republic, or children in South Sudan suffering from malnutrition and violence, to name a few.

Lloyd clearly has a lot on his plate. “It’s a good plate,” he said without missing a beat. “When you are in a position where you can really change people’s lives, it’s a real blessing.”

To make a tax-deductible contribution to UNICEF’s relief efforts for refugee and migrant children, visit unicefusa.org/migrantcrisis.