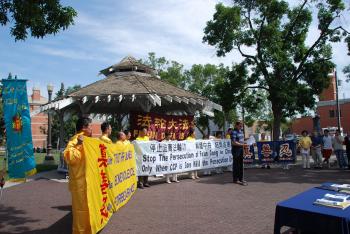 To mark the anniversary, Falun Gong practitioners around the world are holding various events to condemn the persecution and call on the Chinese regime to free all prisoners.

In Edmonton, Falun Gong practitioners on Saturday organized a rally at the Wilbert McIntyre (Gazebo) Park, situated next to the Strathcona Farmers’ Market.

The rally began with opening remarks by Dr. Minnan Liu who read a statement from the Falun Dafa Association of Canada.

“The persecution that began with the order by Jiang Zemin back in 1999 that Falun Gong was to be destroyed in less than three months has now lasted 10 years; as one famous Chinese scholar has stated: ‘Falun Gong cannot be defeated.’ Our path is guided by our universal belief in the principles of Truth, Compassion, and Forbearance,” she read.

“We are grateful to the many Canadians who have extended their support in the past. It made big difference. Without the outside voice and support, the situation in China could be considerably worse. Together we bring hope to China and beyond.”

Mr. Rathgeber, who spoke on behalf of all Conservative MPs, thanked everyone for attending the rally “to mark this important occasion.”

“Falun Dafa has received considerable recognition for its efforts to promote harmony, tolerance, and empathy in society. Practitioners benefit from a myriad of spiritual and physical benefits,” he said.

“The persecution of the Falun Gong practitioners in China is rightly of concern to all Canadians. Respect for human rights is a basic Canadian value and fundamental tenet of our foreign policy. In accordance with these beliefs, the government of Canada continues to make the promotion of human rights an important theme of our entire foreign policy. ”

Mr. Rathgeber thanked Falun Gong practitioners for being active and for holding rallies across Canada such as the one he attended that help to remind everyone that “victims of religion and political persecution do exist around the world.”

“It is important for Canadians to learn from the struggle of the Falun Dafa practitioners over the past 10 years. We must always remember that not all regions of the world enjoy our level of freedom,” he said.

Falun Gong practitioner Shar Chen shared accounts of persecution suffered by her family members and friends back in China.

Mrs. Chen said many of her fellow practitioners back home have been detained and tortured—some to death—one after another.

She said one of her friends, Zhang Zhenggang, was taken into custody in Huaian police station in March 2000 where he was brutally beaten. He fell into a coma as a result of the severe physical assault.

Although a medical examination showed that Zhang had a weak heartbeat and was still breathing, about 50 police officers took him to the crematorium and he was cremated while still alive.

Mrs. Chen said that her sister was also persecuted and was detained by the CCP right before the 2008 Olympic Games in Beijing. Her sister was forced to write a statement to denounce Falun Gong and later lost her position as the chief editor at a local television station.

Among those attending the rally were members of Edmonton’s Uyghur community who had come to show their support for Falun Gong.

Mr. Kamil Tursun, a correspondent of the Radio Free Asia Uyghur service in Canada, said that both Uyghurs and Falun Gong are being persecuted by the Chinese communist regime.

The Uyghurs are one of the ethnic minority groups living mostly in North West China. The group also suffers from persecution by the CCP and many Uyghurs have been killed by the CCP in the recent unrest in Xinjiang province.

“We’re not against the Han Chinese, but we’re against the Communist Party,” said Mr. Tursun.

Mr. Ebrahim Ispilici said that the CCP aims to instill fear in people’s hearts and “just wants to kill.”

The rally in Edmonton concluded with Falun Gong adherents demonstrating the practice’s exercises.