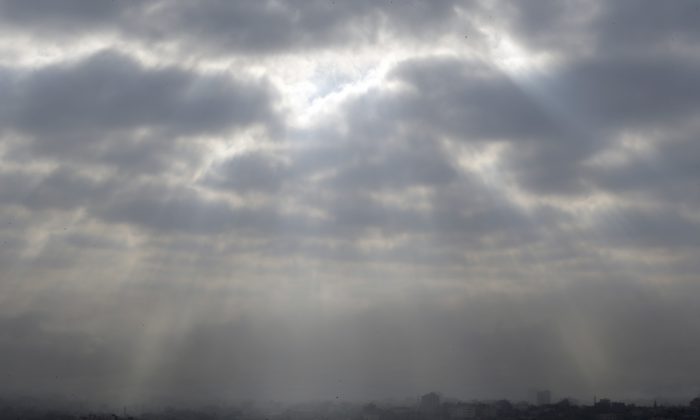 Gaza City, northern Gaza Strip, is seen shortly before the start of a proposed cease-fire, Friday, Aug 1, 2014. Palestinian officials say more than 15 Palestinians were killed in Israeli strikes ahead of the planned three-day cease-fire in the Gaza war. The cease-fire was to take effect at 8 a.m. (0500 GMT) Friday, under a deal brokered by U.S. Secretary of State John Kerry and the United Nations. During the lull, Egypt is to host indirect talks between Israel and Hamas in Cairo on a more durable truce. (AP Photo/Lefteris Pitarakis)
Social Media

In a statement on Friday, the ADL said the company–which sells fruit baskets–is not funding Hamas via charities.

“A widely circulated rumor suggests that the owners of Edible Arrangements, a company that sells fruit baskets through a series of privately owned franchises across the country, are ‘funding Hamas’ through a charitable foundation they support. Several ideologically motivated online sites are urging consumers to boycott the company due to their ties to terrorism,'” the statement reads.

It adds: “In fact, there is absolutely no truth to these unfounded assertions. While the Farid Foundation has provided funding to various organization in the U.S. and abroad, there is no evidence to suggest that any of those funds have been used to support terrorism. Moreover, the company has clearly and unequivocally denounced terrorism, including those forms of terror used by Hamas.”

The ADL notes that the company’s national president is Jewish and several franchise owners are also Jewish.

One frequently article from YoungCons.com posted part of a blog by Debbie Schlussel from 2012, which basically says Tariq and Kamran Farid fund terrorist organizations. However, she doesn’t appear to cite any sources.

The ADL said in a previous statement: “We have received several such inquiries regarding recent allegations by Debbie Schlussel in an article critical of the owners of Edible Arrangements, which sells fruit baskets and the like. Schlussel claims that the owners of Edible Arrangements are funding Palestinian terror organizations, including Hamas, through their Farid Foundation.”

“In our judgment, Schlussel’s allegations lack context and nuance and she does not offer any clear evidence to support them. Even if the Farid Foundation has provided funding for some of the American Muslim groups she references, we believe it is an unsupported stretch to conclude that the Foundation or Edible Arrangements is funding Hamas,” it adds.