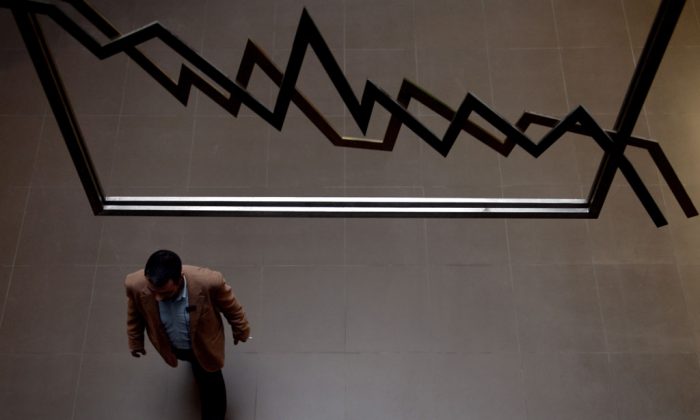 An employee walks at the reception hall of the Athens stock exchange in Greece on April 8, 2013. (Aris Messinis/AFP/Getty Images)
News

As the euro keeps plunging and Greek bond yields are soaring, markets are preparing for the worst case: A Greek exit of the euro and a default on $381 billion worth of debt.

The worry: The opposition party Syriza will win the general election at the end of January, make outrageous demands to creditor nations, and move the country out of the euro.

However, Syriza never said it wanted to leave the euro and default. It does, however, want to modify the conditions of the 2012 bailout and debt restructuring: budget cuts, tax hikes, and labor market reform, which stabilized the debt levels but sent GDP crashing.

It will have to negotiate with the troika of official sector lenders who bailed the nation out in 2010 and 2012 and now hold 83 percent of the country’s debt ($316 billion). The troika consists of the European Union countries (62 percent), the International Monetary Fund (10 percent), and the European Central Bank (8 percent). The Greek central bank also holds a portion.

“I am not convinced they want to leave the euro. They want more flexibility on policy. Then it comes down to troika support or they tell them they are no longer welcome,” said Robert Sinche, global strategist at Pierpont Securities. “We are playing a big game of chicken here.”

If this game of chicken escalates and the worst-case scenario comes into play, consequences for Greece could be dire.

If Greece were to exit it would be very bad for the Greek people because the new currency would devalue and they are importing many things, which would get more expensive. The devaluation would also be a means to evade the necessary structural reform,” said Philipp Bagus, assistant professor at the King Juan Carlos University in Madrid and author of the book, “The Tragedy of the Euro.”

“The standards of living in Greece would fall because they are propped up now artificially. If you devalue, gasoline becomes more expensive, computers from China, cars from Germany. Real wages just fall. The Greek worker would foot the bill, the pensioners, everybody who has income or savings in Greek drachma.”

Without real reform and increases in productivity, getting rid of the troika will be like jumping from the frying pan into the fire.

He said the situation is comparable to that of Russia, with the ruble falling and the people suffering from higher prices of foreign and domestic goods. “Russia had a major export and that was their energy sector. Greece doesn’t have that,” adds Sinche.

Carlos Abadi of investment bank ACGM thinks there is some upside for Greece. “Whatever they have to sell, which is not much, but they have some, will increase dramatically. It’s a typical reduced labor cost recovery. Tourism is a good example.”

He also thinks basic industries such as clothing will receive investment from abroad if labor costs are cheap enough. “The same textiles that are manufactured in Turkey will be manufactured in Greece,” he said.

“The Greek worker would foot the bill, the pensioners, everybody who has income or savings in Greek Drachma.”
— Philipp Bagus, assistant professor, King Juan Carlos University

Calculated purely in monetary terms, the European countries that bailed out Greece have the most to lose from a default because they own most of Greece’s debt.

However, losing $236 billion won’t make a big dent in the debt levels of the whole European Union.

“If you wrote down 100 percent of Greek debt to GDP that would add 2–3 percent of debt to GDP of the rest of the eurozone. Not pleasant but not likely to create a major revision of fiscal sustainability in Europe,” said Sinche.

Bagus, however, warns that some already fiscally constrained countries like Spain or Italy might choke on their share of the loss: “The debt to GDP ratio of all the guarantor nations will go up and some of them will not be able to take it.”

However, the impact on the banking sector, usually more vulnerable to write-downs, will be limited as they got rid of most of their debt during the restructuring in 2012. All in all, private debtors only hold 17 percent of Greek debt, or $64 billion.

But while the markets seem to worry about exactly this worst-case scenario, the chances of an exit and a default are actually quite low.

“All in all, the probability of a Greek exit is higher than three years ago but no higher than one in five,” said Sinche who also thinks more support from the ECB limits the contagion effect on other European countries. He doesn’t think the sentiment is bad enough for Europe to push out Greece but rather relax fiscal standards across the board.

“There was a lot greater concern in 2011 about a Greek exit. At that time it was viewed as the first step of a number of exits and the disintegration of the euro. The 2012 declaration of ECB President Mario Draghi, that he’ll do whatever it takes to keep the euro, puts us in a different situation.”

Bagus agrees the ECB would do the heavy lifting to avoid this type of contagion, despite rules that prohibit it from buying large quantities of European sovereign bonds: “They don’t care very much about rules in any case, so they will buy Spanish, Italian bonds. If there is a Grexit, then they will have to do it until the German constitutional court prohibits them to do so.”

For Bagus, this scenario could create political problems in Germany, something Chancellor Merkel is keen to avoid. The head of the Bundesbank, Jens Weidmann, could step down, creating “a huge political mess,” for Merkel.

Carlos Abadi simply said Greece is not Sudan. “They will not default on those loans; that would be catastrophic. It’s very uncommon for countries to default on multilateral loans. The only three countries that did that were Sudan, North Korea, and Cuba.”